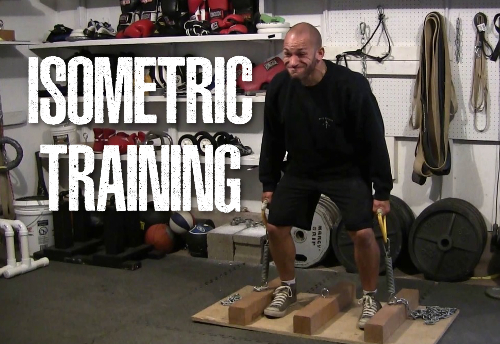 Earlier this week, I shared a video to my Instagram page which featured a homemade isometric training tool that I first demoed in 2009. That post served as an update to an isometric tool that I had previously shown in my Never Gymless and Infinite Intensity books. I also filmed a YouTube tutorial about the isometric tool in 2011 (pardon the old SD resolution).

Yet, despite those older posts, the response that I’ve seen on social media indicates that there are several new readers to the site. Many had not seen the isometric tool before. With that in mind, I will share the instructions again. I’ve always made solid strength gains with isometrics and this device is quite simple to build.

Below, you will see the tool in action, followed by a few sets of trap bar deadlifts. The footage was filmed in 2012. At the time, I was working on improving my trap bar deadlift, and isometric training played a significant role.

There is ample research that supports isometric training for maximal strength development. Therefore, I wanted to build a tool that would allow me to train multiple joint angles for a variety of exercises. What I came up with can be seen below. 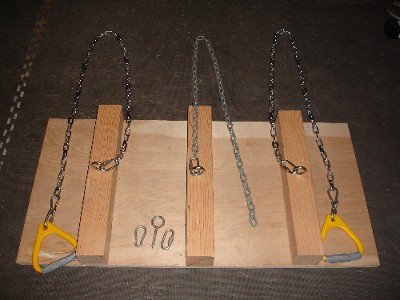 I began by cutting the 4×4 into two-foot lengths. The middle piece is for single arm exercises. I then placed a 4×4 on each side of the center piece. I didn’t follow any precise measurements. I built the tool based on the foot position that I would need. I stood on the plywood and marked off the appropriate width based on the stance that felt most comfortable. I set the 4×4 pieces with liquid nails, and then secured them with long deck screws (after the liquid nails had cured).

Each 4×4 has its own eye hook secured in the middle. Chain is connected to the eye hooks with a quick-link connector. I always make a point to use the strongest connectors that I can find. The eye hooks are rated at 350 pounds each. The chain and connectors are rated much higher.

One modification that can be made to this tool is the addition of a tension coil spring. You can attach the coil to your handle to add a dynamic feel to the apparatus. You may wish to crimp the ends however to prevent the coil from coming undone. If this isn’t possible, pay attention to your connections to ensure that your handle doesn’t come flying off the coil.

The coil seen below is rated for 350 pounds. 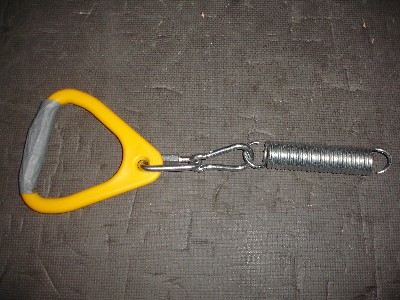 As you can see, a hard pull to the handle only generates a small stretch in the coil. Thus, when using the coil, you can hold the extended position, or you can perform reps by pulling, and then releasing (continuing to alternate in this fashion). 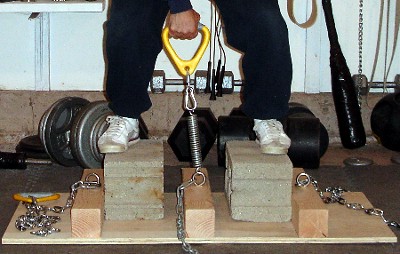 One of the comments that I read on Instagram was about measuring how hard you are pulling or pushing each handle. I’ve seen similar questions asked before where individuals wanted to equate a number to each isometric push or pull with a sensor. Personally, I’ve never felt the need to measure tension however. Instead, I believe that the greatest sensor is iron. In other words, you’ll know you are getting stronger when your lifts begin to improve. That to me is the real test.

Although not evident in the video above, the original 2011 tutorial shows how I can target multiple joint angles by attaching the handles to various points in the chain. For example, you can see me train multiple joint angles here which then translates to strength gains when performing heavy dumbbell snatches.

Isometrics are quite useful in this regard as you can concentrate maximal effort towards multiple joint angles within an exercise. A five second max effort isometric push or pull equates to several reps of dynamic work. This isn’t to say that isometric work is superior to dynamic work, but rather to highlight its potential. Ideally, isometric work and dynamic work should be combined to reap the best of both worlds. Such an approach was much more common among strength legends from previous generations. As always, plenty can be learned by studying the past.

In summary, I have no commercial stake in anyone performing isometrics. All that I can do is share my experience over many years. The strength gains that I’ve realized through isometrics have been both consistent and considerable. And while several options do exist for equipment, the above seen homemade tool is by far my favorite. It’s never failed me as far as developing strength and is still as good as new after 10+ years of regular use.

“Learning is never cumulative, it is a movement of knowing which has no beginning and no end.” – Bruce Lee