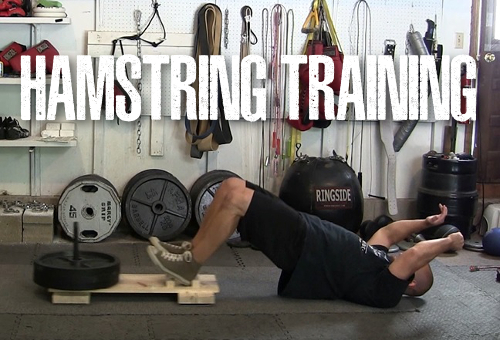 As mentioned in my last entry, I recently found some old training footage that I thought was lost. It’s been fun looking back at the clips as I’ve inadvertently confirmed a message that I’ve preached since starting this website many moons ago. To put it bluntly, quality exercises and training techniques are not new. More often than not, what worked before continues to work today. So much time is wasted looking for new or different methods rather than using what’s already been proven effective. Thus, for the sake of his entry, we’ll look at old school hamstring training as a prime example to that premise.

The two videos below range from approximately 10 to 15 years old. In the first, you’ll see me perform what’s often referred to as a Nordic hamstring curl or natural glute ham raise. I perform the exercise from a homemade bench that I made in my driveway with scrap wood and no preconceived plan. Another homemade option can be seen here (via Matt Wichlinski), or you can perform the exercise with a barbell as demoed here by Bret Contreras.

Next, you will see two variations of another homemade hamstring device. Both have furniture sliders attached to the bottom for smooth sliding over carpet. Weights are added to a piece of pipe that is secured by a pipe flange. Small strips of wood serve as foot pegs to prevent the feet from sliding. Each design is simple, but also highly effective. Very few exercises hit my hamstrings as hard as these inexpensive, low-tech tools.

Ironically, in the 10 to 15 years that have passed since filming these videos, little has changed regarding the movements demoed above. Both the Nordic hamstring curl and lying hamstring curl continue to challenge my hamstrings as well as any other exercise. The hamstring pump experienced from these movements is like no other.

Unfortunately, these exercises remain relatively unknown. Since resharing these old videos, my inbox has been flooded with questions about the exercises and equipment. Loads of fitness conscious people have never seen either. One reason is likely because athletes continue to make the mistake of neglecting direct hamstring work. As a result, it should be no surprise that hamstring injuries remain one of the most common injuries in all of sport. And what’s worse is that such injuries typically require a lengthy rehabilitation period.

So, what’s the solution?

For starters, don’t assume that performing squats alone has your lower body needs completely covered. Instead, take the time to target the hamstrings directly. Speaking from experience, I believe that direct hamstring work has been instrumental to my training over the past 20+ years. Not only has it helped my overall strength (ex. deadlifting), but I’ve also been able to perform flat ground and hill sprints safely without ever experiencing any injuries.

Furthermore, I’m not suggesting that you need to perform the exercises demoed above. There are plenty of options for hamstring training. What I am suggesting though is that you take the time to research and educate yourself on the subject. With a quick search, you can find loads of options. Even a pair of inexpensive furniture sliders can do the trick on their own (ex. see here).

In summary, as the fitness industry moves further away from substance and more towards flash, it can be particularly useful to look back in time to find proven techniques that were utilized and delivered without an agenda. Athletes from the past weren’t concerned over how many likes they’d receive on social media by performing an exercise. Instead, they focused solely on doing what works.

In today’s world, the opposite is often true as more and more fitness professionals dance around hardly dressed, with less substance than clothes. Don’t be fooled by the hype. As I’ve said for years, strength isn’t new. And while we may come across a new idea or improvement on occasion, that doesn’t negate the fact that proven methods are already established and readily available to anyone who is willing to research and learn.

Take the time to invest in yourself by studying and learning from the past.

“Sooner or later, everything old is new again.” – Stephen King