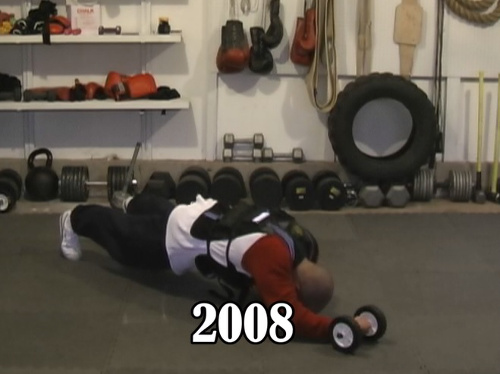 It’s been a while since I updated the site. Coaching has consumed most of my time, so I haven’t had many opportunities to write. What I have done though is continue to train the same way I always have. Thus, while I might not write as often as I once did, my work in the gym remains largely the same. I don’t waste time trying to reinvent the wheel. Instead, I work hard and remain consistent with what I already know to be effective.

Speaking of wheels, I’m still using a pair that I made over 15 years ago. Below you’ll see a quick compilation of rollouts that dates back to 2004.

After posting the rollout compilation, I saw a few comments from people asking what’s the point of consistency if you aren’t pursuing new challenges. The logic in that question is flawed however. You don’t need to do something new to demonstrate progress.

Being able to continually do what you once did (perhaps better than before) is an example of progress. And maintaining past ability becomes increasingly important as each year passes. Using myself as an example, the video above begins with footage of me in my 20s. You’ll then see me in my 30s and 40s. I might be older, but I’m also bigger, stronger, and more capable with the wheels than I was before. That is progress.

And if I’m able to continue using the wheels into my 50s, 60s, and beyond, that too will be progress. I don’t need to constantly seek out something that is new or different. I can continue to challenge myself with an exercise that’s already proven to be effective.

Now that I’ve harped on the importance of consistency, let me shift gears quickly and remind you that being consistent does not mean you’re against variety. As I’ve said before, variety can be subtle. It’s possible to remain consistent with exercises that have proven beneficial, while including subtle forms of variety to prevent staleness.

In summary, one of the biggest mistakes I see are the perpetual program jumpers who constantly hop from one idea to the next, without ever sticking with something long enough to reap the rewards. If you constantly shift gears and change programs, you never spend enough time working with anything to make any meaningful progress.

Once you’ve found an exercise or program that’s proven beneficial, there’s no reason to abandon it just for the sake of variety. I’d much rather use something that I know will work than take a chance on something that doesn’t have a proven track record. And please note, I’m not suggesting that you should never try new things. Just don’t be so quick to abandon what already works whenever you do.