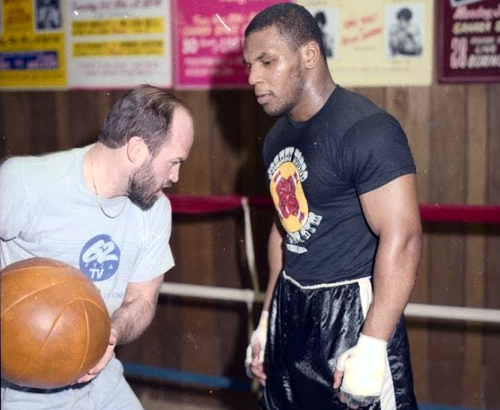 If you follow my social media pages, you’ve likely seen me share videos that highlight the old school training approach of dominant athletes from the past. I’ve shared many examples over the years, but few attract as much attention as those of a young Mike Tyson. Under the tutelage of Cus D’Amato and Kevin Rooney, Mike Tyson became a 22-year-old world champion who was 35-0 with 31 knockouts.

Unfortunately, Cus D’Amato passed away in 1985 and Kevin Rooney was fired in 1988 (under Don King’s influence). As a result, we will never know how good Mike Tyson could have been. What we do know however was that he was a dominant force in his short prime. And during that time, Mike Tyson was a product of the old school. His training approach was devoid of any fancy equipment or facilities.

Below, you’ll find a link to a training compilation of a young Mike Tyson. Within the video, you will see Tyson running, skipping rope, hitting the bag, sparring, performing calisthenics, and more.

What you won’t find is anything fancy. Just a constant dose of hard work with the basics.

Next, you’ll see a more detailed look at Mike Tyson hitting the pads with his trainer Kevin Rooney. Notice how he repeatedly practiced various combinations, footwork, and defense. The emphasis was clearly on skill development and practicing the sport itself.

As I’ve said before, the best way to become a better boxer is by spending more time boxing. And the same logic can be applied to any sport. Nothing is as important as sport practice. Everything else is secondary.

Simplicity and the Old School

One of the beauties of the old school was that no one was trying to sell athletes on the idea of an easier way. There weren’t constant advertisements for 30-day transformation programs or designer supplements that would catapult athletes to greatness. There was no easy approach. Instead, there were actually guarantees of a difficult road. It was expected that you would suffer. No one pretended otherwise.

Coaches and trainers were also different. They didn’t spend their days dreaming up new ideas to market on social media. Instead, they were content to use what worked without concern over who was watching. As for the approach, it was simple, yet effective. Hard work was the norm, and sport practice took precedence over everything else.

Although this entry highlights the training of Mike Tyson, there is a take away lesson that is applicable to all. Regardless of your goals, hard work will always be the most important ingredient. Often, the methods that you use are less important than the effort put behind those methods.

When you consistently bust your ass and give everything you have, good things tend to happen. Success is the byproduct of hard and consistent work. The work doesn’t need to be fancy or flashy. It just needs to be done, and it won’t always be fun.

As a professional boxing coach, my job description is simple. I prepare fighters to win. There are no bonuses for being different or original. In the sporting world, real athletes and coaches are measured by results. No one cares about what methods you use to achieve those results. It’s the end product that matters.

Thus, I don’t have any hidden agendas when preaching the benefits of the old school approach. I don’t receive an old school commission check for training my fighters similarly to how many of the greats from the past trained. I am only using what I believe to be the most effective approach, and I’ve tried just about everything.

In summary, don’t be so quick to assume that anything beyond a few years old is somehow outdated and archaic. Effective training techniques are everything but new. And as much as I remain open to new ideas, I’m experienced enough to know that improving on the past isn’t nearly as common as many in today’s’ era would like you to believe.

“Discipline is doing what you hate to do, but nonetheless doing it like you love it.” – Mike Tyson