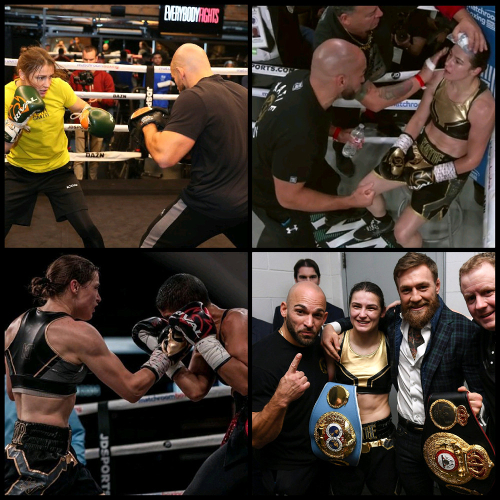 I’m happy to report that I’m back from a recent trip to Boston where Katie Taylor and I came away with another impressive victory, improving her professional record to 11-0. Katie retained her two world titles with a dominant, shutout performance over former world champion Cindy Serrano. Katie was in complete control from the first round on, handing Serrano her first defeat in over 6 years. All three judges scored the bout the same, 100-90.

Thanks to those who made the trip to the TD Garden to see the fight, as well as those who tuned in via Sky Sports or the new DAZN streaming service. We are always grateful for the widespread support.

The Irish Supporting the Irish

It’s also great to receive so much support from other past and present fighters. Two in particular will surely ring a bell with most readers. First, you can see the legendary Micky Ward pop in while I was wrapping Katie’s hands. It’s always great to see Micky as I’ve taught his patented double left hook to every fighter I’ve ever trained. You can see him give a quick demo below.

Next, you’ll see Conor McGregor lend his support shortly before we walked out to the ring. He’s also continued to show his support after the fight via social media (ex. here and here).

It looks like we will be back in action again in December. And while the date and venue have not yet been confirmed, I’ll post updates to social media as soon as I know. Just follow any of the links below.

Thanks again for the support, and check back soon as I’ll be posting more training entries to the blog this week.