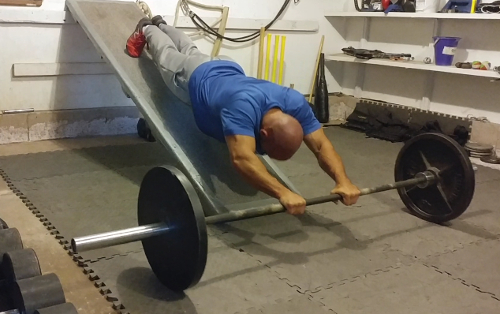 Over the years, I’ve often highlighted the importance of consistency. I never stray too far from the exercises that have benefited me the most. I’m not about to abandon a valuable movement just to say that I’ve included some variety. On the contrary, I enjoy a more subtle approach. I’d rather vary how I perform a useful exercise instead of constantly seeking out new movements.

One exercise that I’ve often used to highlight my approach to variety are rollouts with an ab wheel. If you are familiar with my work, you have likely seen several rollout variations. Yet, after over 20 years of working with an ab wheel, I’m still uncovering different ways to perform the exercise. And while that might seem irrelevant to you, I believe there’s an important lesson to discuss. In short, it’s never too late to uncover new ways to improve.

There is no denying that rollouts rank at the top of my list for beneficial core training exercises. Rollouts have been invaluable to me over the years. I’m still discovering new ways to benefit from the movement however.

Most recently, I have begun working with rollout variations for timed rounds. One example can be seen below (pardon the loud music).

By integrating pushups and rollouts for timed rounds, I am no longer just targeting the core. This combination will also blast the upper body and challenge your conditioning. As the upper body and core fatigue during each round, it becomes more and more difficult to control your breathing. It’s almost as if everything creeps up and hits you at once. Core strength and endurance are challenged as the upper body begins to fatigue. All of this happens while you’re simultaneously struggling to control your breathing. Difficult is an understatement.

Another variation involves working from a ramp. You’ll need a barbell to perform this exercise as traditional wheels would not allow for such range of motion.

When most people see this variation, they are correct in assuming it’s difficult. Many are mistaken when asked to identify why it is so difficult however. Yes, the upper body and core will be challenged, but it is even more difficult to control your breathing as the set continues.

I was even mistaken when I first began experimenting with the exercise. Initially, I was just looking for another way to challenge the core. What I found though was much different. As the ramp became higher, I had to focus hard on not allowing my feet to slide. My entire body was therefore braced, which made it quite difficult to control my breathing for timed rounds.

When I first began working from a steep angle, I was light headed after each set. I wasn’t about to give up though. I kept working hard and I’m now able to perform the exercise continually for timed rounds. I’ve made considerable improvements in learning to control my breathing. This all happened by accident as I was initially just looking for a different way to challenge the core.

You don’t need to perform the exercises above to grasp the significance of this entry. Ultimately, it is impossible to know when you are going to come across a hidden gem. It often happens when you least expect it, but there’s a good chance that you’ll be working hard when it does.

Using myself as an example, I’ve come across what I consider a gem with an exercise that I’ve performed for over 20 years. I’ll be the first to admit that even I was surprised. It was nice to be reminded though that we are never too old to learn or improve on something we’ve done before.

Good things tend to happen when you constantly strive to do the best that you can.

“Strive for continuous improvement, instead of perfection.” – Kim Collins