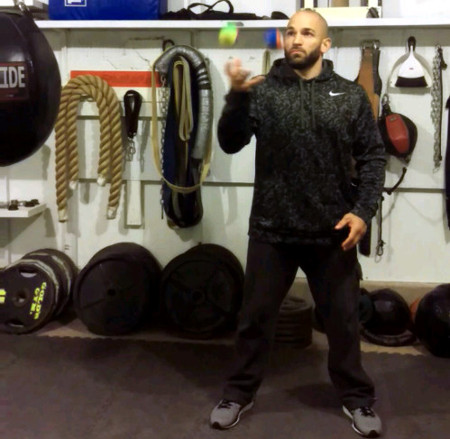 If you’re familiar with this blog, you have likely seen me discuss the importance of hand-eye coordination. As I’ve said before, there’s much more to training than strength and conditioning. You’ll be hard pressed to find many athletes who wouldn’t benefit from improved coordination.

With that in mind, I’m a big believer in practicing simple activities such as juggling. In fact, I’ve already written several articles on the subject. One thing that I haven’t mentioned though is how juggling does not need to involve three or more objects. In the video that follows, you’ll see three useful variations that you can practice as a beginner.

For starters, it’s worth noting that I am far from an expert juggler. I’m just a coach who believes that juggling is beneficial for his athletes. Juggling is not only useful for hand-eye coordination, but also for the brain. I recommend it to everyone.

If you’ve tried to juggle before and struggled with three ball patterns, it is useful to begin with two balls. Below you’ll find three simple skills to practice.

Naturally, these juggling patterns should be practiced with each hand. Don’t be surprised if your non-dominant side struggles initially. With regular practice though, you can make considerable improvements with just a few minutes each day.

As far as when is the best time to train hand-eye coordination, new skills should be practiced when you are rested. For example, you could include juggling as part of your warm-up. And once you become proficient with a particular skill, it can also be useful to practice while fatigued (as discussed here).

Another useful option that I’ve had success with is juggling for a few minutes at the start of each day. Doing so has proven to be a great way to get my brain firing early on. Juggling essentially forces me to be mentally sharp and aware. Even a split second lapse in concentration will cause the balls to fall.

I’m sure there are some long time readers of the blog who are tired of seeing me write about hand-eye coordination. Unfortunately, it’s just one of those topics that does not receive enough attention. Thus, while it’s not my intent to continually discuss the same topic, I believe there’s still plenty of athletes who could benefit by focusing more time towards hand-eye coordination.

And as I’ve said before, another benefit of these drills is that they aren’t physically demanding. You can practice skills such as juggling every day without hindering your recovery. All that it takes is a few minutes of dedicated practice each day. Any serious athlete who can’t find time isn’t looking hard enough.

“Success is nothing more than a few simple disciplines, practiced every day.” – Jim Rohn