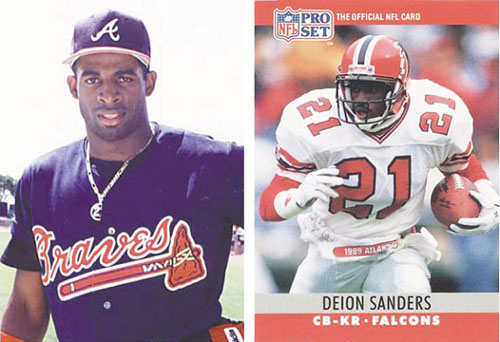 Deion Sanders is undoubtedly one of the most gifted athletes of all time. As a college athlete at Florida State University, he was a standout in baseball, football, and track. Afterward, he became one of the few athletes to play two professional sports simultaneously. In 1989, he actually hit a major league home run and scored a touchdown in the NFL in the same week. That may never happen again. Not only is it rare to find an athlete with his talent, but it’s even more rare to find such a gifted athlete who practices the way Sanders did. His work ethic matched his talent.

One of the biggest mistakes an athlete can make is to get too comfortable relying on talent. Natural ability might propel one at the local level, but it’s only a matter of time before an athlete faces competitors with equal ability. At that time, talent must be coupled with work ethic if the athlete wishes to excel at the highest level. Deion Sanders is a prime example of this premise.

As a 7-year-old child, Sanders told his mother that he’d one day make it rich so that she would never need to work another day. He never stopped working until that promise turned true. There are stories of Deion outworking his teammates that date back to his childhood and continue throughout his professional career.

“We couldn’t even get any reps in practice because Deion would take them all… He practiced like it was a game.”

And Sanders didn’t just apply his work ethic to the field. He was also fanatical with his film study. He was known to repeatedly study the intricate details of his opponents in an attempt to gain an advantage.

“It was like he was a boxer preparing for a fight. He knew everything about the dude across from him.”

It’s one thing to read quotes from Deion’s former teammates, but it’s even better to listen to the man himself. Below is a recent video of Deion Sanders addressing some of the current athletes at Florida State University. The brief clip is less than 2 minutes but well worth a look. Deion’s passion remains undeniable. His competitive fire still burns within.

As I’ve said before, first you make your habits and then your habits make you. Don’t just take my word for it however. Listen to one of the greatest athletes of all time. Deion Sanders might be known for his freakish ability, but we might never know his name if it wasn’t for the relentless work that he put in day after day throughout his career.

Regardless of your goals, never acclimate yourself to slacking off in practice. You need to show up each day willing to work. One of the most surefire ways to improve is by repeatedly practicing to be the absolute best that you can be. Giving everything you have to better yourself is perhaps the safest investment you will ever make.

Regardless of the outcome, you’ll always come out a better version of yourself.

“Call it cocky. Call it arrogant. Call it what you want… I came here to be the best ever.” – Deion Sanders