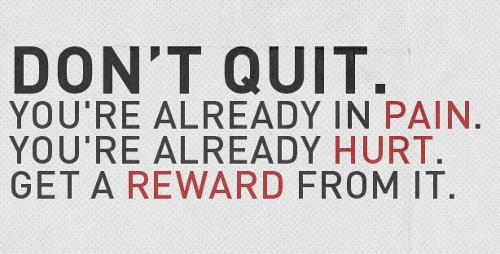 One of the biggest myths of all is to believe that you’ll someday achieve a level of success that catapults you beyond the struggles of life. Over the years, I’ve seen countless athletes and entrepreneurs who’ve been fooled to believe in such a fantasy. Success is falsely perceived to be a lavish world that’s free of pain, worry, and misfortune. Sadly, no such world exists. Life will always include its share of hardship. With that in mind, don’t shy away from the truth. Instead, change your perception of adversity so that you can eventually benefit from its experience.

No One is Immune

In the brief video below, Joe Rogan discusses adversity and its relevance to us all. It’s a short clip that’s well worth a listen.

Rogan’s words resonated with me, as I instantly thought back to one of my favorite quotes.

“When something bad happens you have three choices. You can let it define you, let it destroy you, or you can let it strengthen you.”

It was many years ago, but I still recall reading these words for the first time. I nodded my head in agreement as I replayed certain experiences in my life that proved such words to be true. There’s no doubt that I wouldn’t be the man I am if I hadn’t faced some of the challenges that I did as a youngster.

Ironically, not long after I saved that quote to my list of favorites, I found myself living out those words again. It was four years ago this month when I woke up one morning to hear that my best friend had been tragically killed in a car accident.

We were best friends as children and throughout my adult life. We had both worked hard to build successful careers and happy families. Life was going well for each of us. There were actually times when I thought to myself, “Holy shit, we really made it.”

But then out of nowhere, I was once again reminded that whatever you have can be gone in an instant. There’s no such thing as working yourself to the point that you are immune to pain and struggle. Life doesn’t care who you are or what you’ve done. It can come out of nowhere and snatch away everything you’ve worked to achieve.

The Moral to the Story

I’m not sharing my story for sympathy, but rather as a reminder that adversity doesn’t discriminate. Eventually, it finds its way into everyone’s life. Therefore, don’t use your struggles as an excuse. No matter what you are going through, someone else has it just as bad (or worse). That’s not a reason to stop living. If anything, it’s a reason to keep going.

Losing my best friend hit me hard. I’m not ashamed to admit that I’m an emotional person and I was a mess afterward. Even writing about it 4 years later is upsetting. Yet, as much as I wish it didn’t happen, I know that I’m a stronger person because of it.

As depressing as this entry may sound, it’s important to be realistic about life. I’ve seen far too many athletes achieve some early success only to come crashing down after encountering an unexpected hardship. They basically bought into the idea that they were too good to be knocked down by life. As a result, they weren’t prepared when it happened.

Consequently, I’m always brutally honest with my athletes. I remind them that everything they’ve worked for can be gone in a flash. So don’t waste your time or talent. Just because you’ve tasted success doesn’t mean you can take your foot off the gas and continue to thrive.

There is no easy way to get ahead or to stay on top. Anyone who has accomplished anything worthwhile had to travel a difficult road to get there. Never be foolish enough to believe that your problems are the only problems in the world. Things can always be worse.

Fortunately, it’s also true that you can always do more. It won’t be easy, but life isn’t supposed to be. Living is a privilege that’s revoked to many each day. So stop making excuses and instead make the most of your time while you still can.