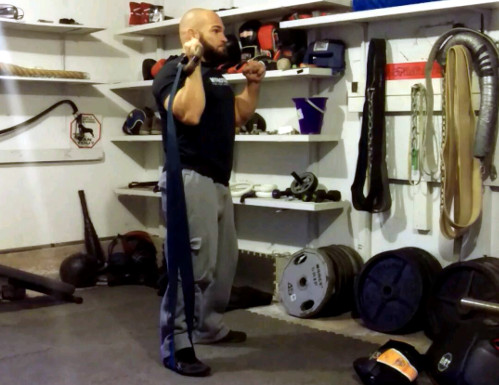 I’ve always been a big fan of heavy overhead presses. I’ve pressed everything from dumbbells to barbells to odd objects of all sorts. Each variation offers a unique challenge. What they all share in common however is the difficulty experienced towards the top of the lift. In other words, if you fail on an overhead attempt, the failure usually occurs towards the end of the lift.

With that in mind, it can be useful to focus some direct attention towards the last few inches of the press. This area can be targeted directly with isometrics or resistance bands. An example of the latter option can be seen below.

To perform the band resisted press, I stand inside of a 41 inch loop style resistance band. I also use a homemade handle to aid in gripping the band. The handle becomes particularly useful when pressing more than one band at a time. Gripping the bands directly can serve as a distraction from the actual press. 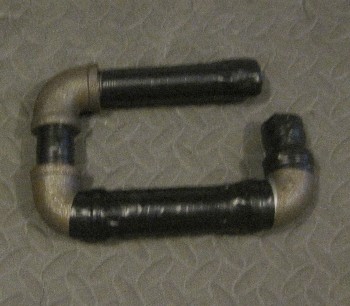 I first demonstrated the homemade handle used for pressing in 2011. The original YouTube video can be found here. The handle itself consists of the following parts:

My homemade handle has served me well for many years. It was easy to make, relatively inexpensive, and is incredibly durable. With that said, commercial options have become more readily available since I first demoed the handle. For instance, Iron Woody Fitness now sells a unique pair of handles for a reasonable price.

Resistance bands are obviously useful when traveling. There are loads of exercises that can be performed inside of a hotel room with minimal space. Band applications extend far beyond traveling though. The overhead band press is a prime example. I often include this exercise within a heavy lifting session.

Whenever I recommend a resistance band exercise, it’s important to note that I’m not doing so in hopes that you’ll abandon lifting. In my opinion, the best use of resistance bands is when they are used in conjunction with other strength protocols. You certainly don’t need to choose one training style at the expense of all others.

For example, I might start a strength workout with heavy overhead pressing. I’ll perform several sets with near maximal loads. I don’t start with bands as I prefer to press as much weight as possible. I’m not looking to pre-fatigue myself with bands.

Following the heavy presses, I’ll shift gears to another exercise that isn’t directly related to pressing. I do this so that I can partially recover from the heavy overhead work before pressing bands later in the same workout. Once I’ve recovered (at least partially) from the heavy presses, I’ll shift gears back to pressing but this time with bands. I typically start with a single band for moderate reps before adding a second band for low reps against near maximal tension.

Resistance bands are one of the few gadget-like tools in the fitness industry that offer tremendous value. I’ve had some of my bands for over 10 years now and they are still going strong. Aside from being incredibly convenient while traveling, the bands have offered tremendous value to me as a strength training aid. The band press in particular has helped me considerably over the years. My overhead lifting ability is always at its best when I’m mixing heavy presses with band resisted presses.