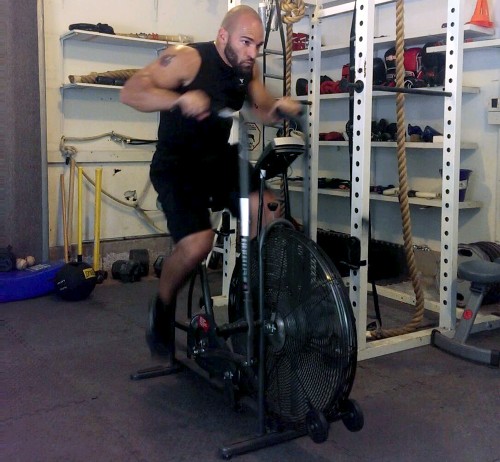 Earlier this week, I posted a brief video to Instagram of me working through an interval on my old Schwinn Airdyne bike. I shared the video in humor as I joked about its fan providing fresh air on a hot, humid day. In the time since, I’m surprised at how many questions I’ve received about the bike and the workouts that can be performed with it. With that in mind, I will use this entry to discuss some of the options that are available with fan bikes such as the Schwinn

I’m not sure who coined the phrase Satan’s Tricycle to describe these fan bikes, but whoever did hit the nail on the head. The bikes are both brutal and evil. The only simple thing about a fan bike is that there aren’t any settings for resistance. Resistance is controlled by the user. As you pedal and pump the arms faster, resistance from the fan increases making it more difficult. In other words, no matter how hard you work, the bike always wins. If you haven’t tasted fatigue after an Airdyne workout, you have no one to blame but yourself.

In the 10+ years that I’ve owned my bike, I’ve had several world class fighters use it and the bike remains undefeated. It isn’t unusual for me to see a professional fighter crumble alongside the bike one week, and then win a nationally televised main event the next. The bike isn’t just useful because of its difficulty though. The real value lies in its effectiveness. Few tools provide such a full body conditioning effect. You aren’t just cycling, but also pushing and pulling simultaneously.

In addition, no matter how hard you work on the bike, you can expect to wake up relatively fresh the next day. Lack of an eccentric component makes soreness essentially nonexistent. I’ll even go so far as to say that the bike can be useful for recovery. It might not seem like it at the time, but you’ll likely forget that you used it when you wake up the next morning.

Before discussing fan bike workouts, let’s first explore some options for acquiring a bike. For starters, you can certainly find a Schwinn

bike online. There are two downsides however. First, when purchased new, these bikes aren’t cheap. You can expect to pay several hundred dollars. I’ve also read that the newer Schwinn bikes lack the quality of their earlier models. I haven’t personally used one of their newer bikes, but I’ve read several complaints. The design has also changed. For example, you’ll notice that their current AD6

model looks much different from my bike. My old Airdyne looks much more like the Assault Air

The souped up Assault Air is rather pricey though and it doesn’t appear that the older Airdyne models are available for purchase. Fortunately, it isn’t unusual for Airdyne bikes to pop up on Craigslist or even at local tag sales. The average person usually isn’t up to the challenge of battling a fan bike. As a result, these bikes are often sold after minimal use. I’ve had several people tell me how they struck gold and found a used Airdyne for less than $100.

Furthermore, if you come across an older model, it’s safe to assume that it well constructed. Schwinn was a very reputable brand for many years. I can’t speak on the current craftsmanship, but I can speak to my bike’s longevity and durability. It’s extremely well built and has held up to regular use over many years.

As for Airdyne workouts, I keep my approach rather simple. After all these years, I still use the bike similarly to how I did when I first acquired it. After a brief warm up on the bike, I’ll usually perform a series of intervals before cooling down with a few lighter minutes of pedaling. My style of bike work can be summarized in the 2 or 3 seconds of footage seen in the video below (refer to the 2:16 mark). I give the bike everything I have.

A few sample workouts are listed below.

II. Timed Rounds – Another variation that we sometimes use as a finisher is to perform two or three minute rounds on the bike. For example, you’d cycle through four 2 or 3 minute rounds, resting 30 to 60 seconds between rounds. During these rounds, you’ll maintain a steady, but brisk pace. I define such a pace as one where you both maximize and optimize your output.

III. Continuous Work – Another variation that I’ll use on occasion is to ride the bike continuously. I rarely exceed 15 minutes as I find longer sessions to be incredibly boring. If I need a longer conditioning workout, I’d rather divvy the work in more than one place. For example, a 30 minute workout might include 10 minutes of rope skipping, 10 minutes of swinging a sledgehammer, and finally 10 minutes on the bike. During each minute of continuous biking, I’m still looking to maximize and optimize my output though. I strive to accumulate as much work as possible.

IV. Continuous Work Intervals – A variation to continuous work is to add an interval at the beginning of each minute. For example, I might go hard for 20 seconds, followed by 40 seconds of moderate pedaling. I’ll continue this approach on every minute for 10 to 15 minutes. You can also vary the work-to-rest ratios (ex. 15/45, 30/30, etc.). There are endless options with this approach. I encourage you to experiment with different times.

V. Pyramid Intervals – Another option is to pyramid through various work-to-rest ratios within a single session.

For example, after warming up on the bike, continue with the following sequence:

VI. Longer Intervals – Yet another option is to perform slightly longer intervals. I typically cap the time at 60 seconds for these “all out” intervals. A minute will never seem so long. After just a few intervals, your all out effort won’t look like much of an effort at all. You can expect to be challenged physically and mentally.

Clearly, these are just a few of the workout options available to you with a fan bike. In the past, I’ve worked through longer Airdyne workouts, but found that I’d eventually become bored of the bike. I’m certainly not suggesting that everyone limit their fan bike workouts to 10 or 15 minutes. That’s just the time frame that has worked best for me in recent years. It’s also worth noting that I rarely just work with the bike during a session. The bike often serves more as a finisher or as one piece of a larger conditioning puzzle.

If you have any other questions about fan bikes and workout options, feel free to shoot me an email or comment below.