To begin, I’m not here to debate the pros and cons of kipping pull-ups. In my eyes, a pull-up is just an exercise. I won’t split hairs about how different people choose to perform them. To each his own. What I can say however is that the kipping craze has led some athletes to flail on the bar like a fish out of water. As a result, the top portion of the exercise becomes nothing but a free ride that’s powered by momentum. Little attention is focused towards the last few inches of each rep. To no surprise, those last few inches are often a sticking point when progressing towards stricter or heavier pull-ups. Fortunately, resistance bands can be used to strengthen this common sticking point.

Most people associate resistance bands with assisted pull-ups. We’ve all seen someone attach a band to a pull-up bar and then slip their foot or knee through the bottom loop. This set-up is quite common when working towards your first pull-up. Tension from the band helps to pull your body towards the bar.

A much less common exercise is the band resisted pull-up. With this variation, you will actually be pulling against the band. To perform this exercise, simply attach a band to your waist with a lifting belt

. The opposing end of the band will then be anchored by a heavy dumbbell. 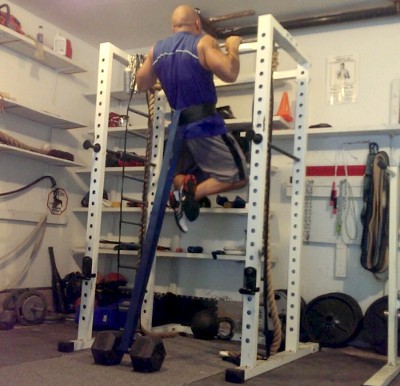 Band resisted pull-ups make the last few inches of the each rep much more difficult. As you pull towards the bar, the band lengthens thus providing a steady increase in resistance. The band will literally try to pull you down.

To perform band resisted pull-ups, you will need a 41 inch resistance band. This size was first popularized many years ago when Dick Hartzell created the original Jump Stretch bands. In the image above, I am actually using one of his originals. It is a Jump Stretch blue band. For many years, Jump Stretch bands were the only looped bands that you could find.

Fortunately, in recent years, it has become much easier to locate quality resistance bands. You can even buy them on Amazon. For example, Serious Steel

has become one of the more popular suppliers. Their #5 band is similar in resistance to the Jump Stretch blue band. It is a strong band that will provide plenty of resistance.

Iron Woody Fitness is another popular supplier. They too offer a large band that is essentially identical to the Jump Stretch blue band.

And if a resistance band doesn’t offer enough of a challenge, you can also wear a weighted vest. The combination of band + vest is quite difficult. Expect to be challenged throughout the entire range of motion.

Refer to the 1:25 mark in the video below for a brief demonstration.

As popular as band assisted pull-ups have become, I’m surprised that band resisted pull-ups remain largely unknown. Whenever I demonstrate the exercise, I’m shocked by how many people haven’t seen it before.

Band resisted pull-ups have been a staple in my pulling arsenal for many years now. Band resistance has been a great addition to my heavy pull-ups and chin-ups. There’s no doubt that I am stronger throughout the entire range of motion.