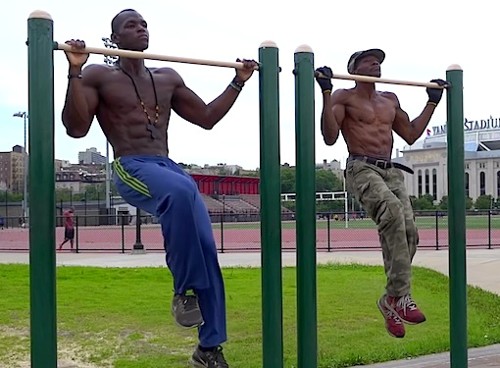 Last month, I shared a story of an inspiring man (Anthony Alderman) who has been exercising with calisthenics for over 45 years. Today, I’ll share a story of a 60 year old man who performs a similar routine. In fact, the training style is almost identical. And like the previous entry, this man (Will) possesses the strength and ability to humble most healthy adults a fraction of his age.

Before I explain why I’m sharing such a similar video to last month’s entry, first take a look at Will’s amazing skills. I’m not easily impressed, but Will has my attention. His abilities would be impressive for anyone, but even more so when you consider his age and injuries.

To no surprise, Will’s strength is the product of hard work and consistency. As he speaks, it becomes immediately clear that he has no secrets to share. Instead, he preaches the significance of effort, self-belief, and a willingness to change.

When I wrote about Anthony Alderman last month, I concluded the entry by considering a hypothetical scenario. After highlighting his relatively simple calisthenic program, I asked everyone to ponder the following:

“Imagine if everyone followed suit and began to perform similar exercises on a regular basis.”

I continued by saying that if the world followed Anthony’s example, his story wouldn’t be a story. It would just be what we’ve come to expect from adults at any age. When I made those comments, I wasn’t minimizing Anthony’s ability, but rather suggesting that it’s much more attainable than the average person believes.

When you look at people such as Will or Anthony, the key to their success is easily recognized. It’s free to anyone who wants it. It isn’t the product of a gym membership or personal trainer, but rather their determination and work ethic. To put it bluntly, these men put in work. They embrace the grind. They take pride in their performance and are determined to do the best job possible.

Unfortunately, work ethic doesn’t get enough attention in the world of fitness. It’s much more common to see attention focused towards training programs, equipment, and supplementation. Ironically, we all know people who’ve read everything and train in world class facilities, yet struggle to gain strength or lose weight. Meanwhile, there are those such as Anthony Alderman and Will who train on playground bars and possess the strength and skill to humble the vast majority of exercise enthusiasts.

Plenty can be learned from their example. There is nothing magical about the playground bars. What’s magical is the effort that’s applied to those bars. When you put in that type of work on a consistent basis, it’s only a matter of time before results follow. The young man featured in Will’s video is a prime example. Once he saw what real work was all about, he followed suit and the rest is history.

In some ways, you could say that work ethic is contagious. When you surround yourself with people who put in real work, it’s only natural to follow along. I observe this phenomenon every day as a parent. My kids imitate what they see. With that in mind, it’s about time that we focused on what really matters. I don’t care what you are trying to develop or what equipment you use. I’m more concerned about developing the type of work ethic that will produce results wherever it is applied. Once you’ve developed a solid work ethic, you’ll do well wherever you go. You’ll have too much pride in your work to accept anything but the best.