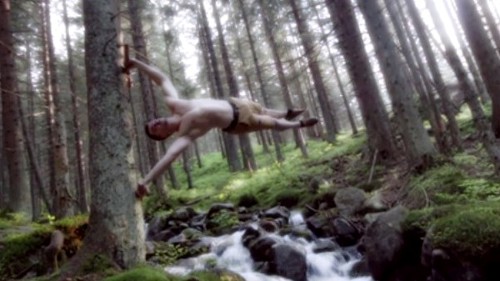 In my last entry, I discussed grit and its relevance to success (see here). A summarized version is that you must work hard, maintain passion, and persevere over time if you wish to succeed. And while there is certainly more to success than can be described in a single sentence, the moral to the story shouldn’t be too difficult to decipher. Success isn’t based on a piece of equipment or any other tangible item. Successful individuals make the most of their surroundings. They do whatever is necessary to fuel their passion. Rather than making excuses for what they lack, they make the most of what they have. A perfect example of this concept can be seen in the video that follows.

Watch how this man (Erik) has turned a wooded area in Slovakia into his own highly effective training grounds. He truly epitomizes the idea that the world is our gym. The physical displays highlighted throughout the video are beyond impressive.

There are no secrets to this man’s success however. When the Freedom Brothers contacted me through Facebook, they were quick to point out that Erik has been training consistently for over 7 years. He does not have any overnight miracles to share. He also doesn’t take any supplements or drugs. Instead, he is simply the product of hard and consistent work.

In many ways, you could say that Erik’s journey has been similar to another calisthenic athlete that I recently highlighted. When I shared Madeleine Leander’s story, she was quick to mention that it took 9 months of daily practice to master to a single skill (see here). Erik has also worked extremely hard over a long period of time. His passion, diligence, and consistency are responsible for what he has become today.

All Erik needs is an open strip of land and he can challenge his body in countless ways. The creativity that he displays is almost as impressive as his physical strength. Erik clearly makes the most of whatever is around him as he sees ordinary objects differently from most. In his eyes, a tree isn’t just a tree and a rock isn’t just a rock. Instead, these are freely accessible tools that can challenge and strengthen the body in ways that most could never imagine.

If more people saw the world through Erik’s eyes, physical fitness would be much more common and fun. While he certainly trains hard, I can guarantee that he also enjoys the work. People who see the world as a gym tend to share at least one thing in common. They enjoy the outdoors and the opportunities that it provides the body and mind. Erik didn’t just find himself training outside by accident. There was a concerted effort to venture outside to fuel his passion.

Hopefully videos such as that above will inspire more people to get outside and enjoy the world that we are lucky to share. Physical fitness is available to anyone who wants it. There are no secrets. Every journey starts with a single step. It’s up to the individual to take that step and then continue the journey one day at a time.

How bad do you want it?

“It is the essence of genius to make use of the simplest ideas.” – Charles Peguy