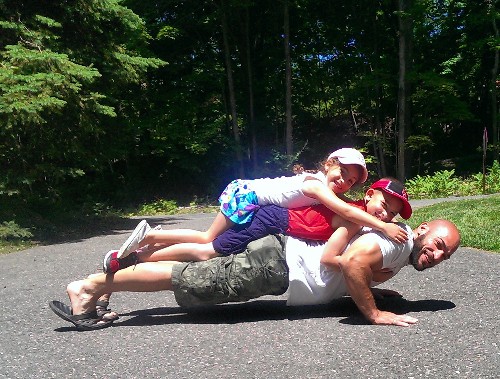 It’s been a few months since Clemson student Mackenzie Pearson wrote a brief essay explaining the dad bod and its so-called appeal. Soon after, social media jumped all over the phrase as it quickly went viral. At the time, I never paid too much attention to the dad bod craze. Everything changed last week however after seeing several media outlets report that it’s been scientifically proven that fatherhood led to fatness. Apparently, science skipped over this father of two children.

The first story that I read about fatherhood fatness was hosted by one of the largest news organizations in the world. CNN released an article with a rather blunt headline that proclaimed the following:

The article itself was based on research published in the American Journal of Men’s Health (see here). The referenced study concluded that adult males tend to gain weight and increase BMI between adolescence and fatherhood. Unfortunately, most readers of CNN won’t take the time to read the actual study. Instead, they will simply glance over a catchy title that is undoubtedly misleading.

Science has not proved that fatherhood will make you fat. The study simply highlighted a trend that is prevalent in society. Fathers don’t suddenly become fat because of children. Weight is gained due to excess food and drink consumption and/or lack of physical activity. You don’t need to be a father to make this mistake, just as being a father does not condemn you to such a destiny.

As a hard working father of two, it truly disgusts me to see fatherhood linked to obesity. My vision of fatherhood is more apt to include descriptive words such strength, character, and leadership. My primary goal in life is to be a hero and role model to my children.

Unfortunately, articles such as that hosted on CNN paint an entirely different picture. For instance, one quote from the above referenced piece states the following:

“I love to cook and eat healthy, but when it comes to compromises on time I will trade a healthy meal for more time with my kids every time.”

Take a moment to digest what this quote actually suggests. If a parent cannot prepare healthy meals for himself, how can we expect him to continually provide healthy meals for his children? Since when did a busy schedule relieve a parent of his responsibility to raise a healthy and active child?

Another troublesome quote from the article states the following:

“When you have your first child, they are your priority. You put everything else on hold, which sometimes means working out and staying active.”

As much as I’m bothered by this quote, I completely agree with the first sentence. Ever since the day my first child was born, my kids have been my priority. My life revolves around my children. I will do anything and everything for them. Apparently, I see things differently than many fathers however as I strongly disagree with the second sentence.

Leading by example is one of the most important things I can do. I can’t expect my children to be healthy and active if I can’t do the same. I will do whatever is necessary to provide an example that my children can imitate. I will never be the type of father who tells my kids one thing, yet goes off and does another. As I’ve said before, prioritizing your health is not selfish. On the contrary, it is something that all parents should do to set a positive example for their children.

There’s no doubt that I am busier as a father than I ever was before kids. I still work the same long hours, but I’m also extremely active in the lives of my children. For instance, I spend several hours each week coaching youth sports. That’s hours upon hours of time that was previously free before I had kids. You won’t see me complaining about it however. I consider it an honor to be able to coach my own kids. The time that I spend with them is time that I will forever cherish. 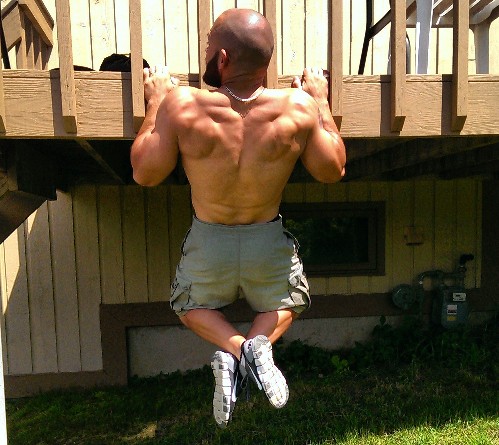 As for what I do in my free time, I don’t even remember what that is. Free time and parenting are polar opposites. There is always something to do. And that’s just another reason why I’m such a big believer in exercising anywhere with anything. For example, you might see a deck as a deck, but I see it as a place to hop up and perform pull-ups. One way or another, I will make time for exercise. It does not matter where I am or what I have. I will always prioritize my health and the health of my children.

Being strong and healthy improves my experience as a father. I can do more with my children. Whether we are walking the dog, throwing the ball, or just running around in the yard, I can always keep up without gasping for air. Seeing my kids laugh and smile as we play outside is all the incentive I need to remain physically fit.

No One Said It Was Easy

Contrary to what some believe, life isn’t supposed to be easy. Life can be extremely difficult and trying. We have all endured tough times at one point or another. Unfortunately, our children will also someday experience just how difficult life can be. No one is immune to the realities of the world. Therefore, it’s extremely important that we prepare our children for what whatever life brings.

One of my favorite quotes on this subject comes from Robert Heinlein. As he once said,

“Don’t handicap your children by making their lives easy.”

On a similar note, don’t handicap your children by demonstrating your own inability to deal with difficult times. Just because it is difficult to make time for exercise doesn’t mean it can’t be done. Do you want your children to grow up making excuses whenever they are forced to deal with adversity? Or would you rather see them work hard to find a solution?

I sure as hell hope for the latter. I won’t just sit around and hope for it though. I’ll be leading by example every step of the way. Fatherhood hasn’t made me fat. It’s certainly made me a better and stronger person however. It’s made me more cognizant of every step I take. I’ve never been more determined to pave a path that my children can someday follow with pride.