Earlier this week, I tweeted that I’m not a fan of the industry’s push to get everyone in shape for the summer. Following that post, I had loads of comments come through via social media. Some people agreed with the message, while others didn’t understand what’s wrong with training for the summer. Based on the feedback and confusion, I believe it is useful for me to elaborate further. 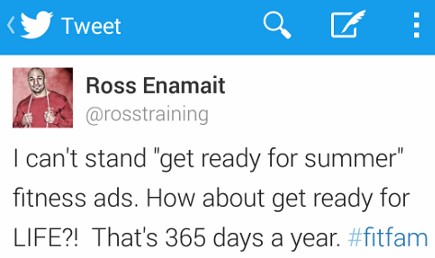 For starters, I have nothing against anyone who exercises to look and feel better about themselves. You absolutely should feel good about the work that you’ve performed. There’s nothing wrong with seeing yourself in the mirror and being proud of the body that you’ve developed. Let’s be honest, if exercise made us ugly, most gyms wouldn’t be very busy.

“If it looks too good to be true, it probably is.”

Unfortunately, the fitness industry can be quite deceiving. For example, consider some of the physiques that you’ll find plastered throughout fitness magazines. Even without Photoshop, many of these physiques are not sustainable on a year round basis. It’s not healthy to restrict caloric intake to such low levels that body fat becomes nonexistent. Just because someone looks a certain way does not mean that the individual is healthy and vibrant.

Speaking as a boxing coach, I often witness a similar phenomenon. If you aren’t familiar with boxing or other combat sports, most professional fighters weigh-in the day before they compete. The physiques that you see at the weigh-in are almost always different from what you see the next day when the athletes enter the ring or cage.

At the weigh-in, many of the athletes are dangerously dehydrated. They restrict fluids to achieve a certain number on the scale. After the weigh-in, they immediately begin to rehydrate and often gain 10+ pounds in a matter of hours. As fluids are restored, the physiques suddenly don’t look as impressive, but the athletes become more and more capable with each passing hour.

Many boxing fans are surprised when I tell them that some of the best action I’ve ever seen has taken place in the gym. Everyone thinks that a fighter peaks for fight night. What they don’t realize is that while the athlete attempts to peak, he is doing so with a weight restriction. When he’s in the gym in between fights, he isn’t worried about cutting weight. He can eat more and weigh a few pounds extra.

At a slightly heavier and healthier weight, the athlete will often perform much better. Although his six-pack might not be as tight, the athlete is physically stronger and more capable. Therefore, it shouldn’t come as a surprise that very few athletes will hit personal bests in the weight room while cutting weight. It is much easier to display strength when you can carry a few extra pounds.

When I think back to my younger days as a competitive fighter, I don’t have any fond memories of myself cutting weight. There were times when I spent several hours drying out in a sauna. I still have a vivid memory of myself flexing in a bathroom mirror a few moments before I stepped on the scale to weigh-in. I had just failed to piss out any last drop of fluid to ensure that I would make weight. I had nothing left. I walked by the mirror and couldn’t believe how ripped I was. For a split second, I felt good until I flexed and nearly passed out. I caught myself on the sink. I was so weak that I could hardly stand up.

When I stepped on to the scale, everyone complimented me on how strong I looked. What they didn’t realize was that my body was shutting down and I could hardly walk back to my seat. I’ll never forget that feeling. Not even my own trainer knew just how bad I felt. It was at that time when I realized that how you look means very little about how you feel.

In summary, there’s nothing wrong with wanting to look better through exercise. I simply encourage you to make exercise part of your lifestyle, rather than something you cram for to look good on the beach. It is possible to find balance. You can exercise to look and feel better while also performing better at the same time. You just need to be realistic as far as what you are trying to build. Don’t let a magazine image fool or discourage you. What you see through a lens does not always reflect how that person actually feels and functions on a daily basis.

“A lie that is half-truth is the darkest of all lies.” – Alfred Tennyson