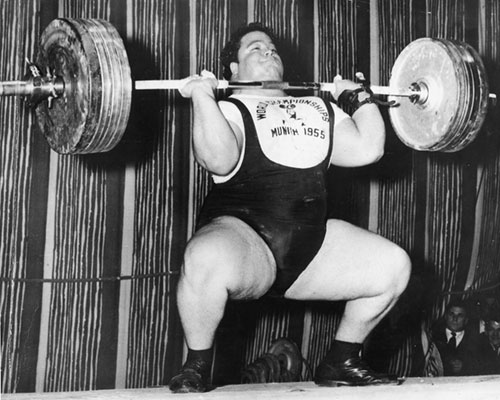 Over the years, I have written several entries about Paul Anderson. He was a legendary lifter whose name will always be synonymous with brute strength. There was much more to Anderson than his incredible strength however. He was intelligent with his training, innovative, and thrived on simplicity. He also understood the relationship between body and mind. Lifting massive loads requires much more than physical strength. There comes a time when the mind becomes equally important.

As stated by Paul Anderson in the video below:

“Mental preparation is so important in weight lifting…”

Unfortunately, many athletes fail to comprehend the significance of mental preparation when lifting maximal loads. The mind receives little attention compared to popular topics such as supplementation, protein consumption, rep range, and periodization. I receive questions about these topics on a daily basis. Yet, I can’t recall the last time anyone asked me how to mentally prepare for a maximal effort lift.

If a picture is worth a thousand words, I’m guessing that a video is worth a million. When discussing mental preparation and its significance, the brief video below offers more than I could ever share through text alone.

This lifter grabs the bar at around the 4 second mark within the video. He then prepares himself mentally for approximately 10 seconds before starting the lift. During that preparation, he’s reminding himself how bad he wants it and the price he’s willing to pay to achieve the desired result. There is extreme focus taking place during those 10 seconds.

The lift then begins at around 14 seconds into the clip and continues for almost 13 seconds. That type of sustained effort does not happen by accident. Fighting a maximal effort pull for almost 13 seconds requires incredible mental strength. It is not enough to be physically strong. There are plenty of lifters with equal physical strength who would have given up on that pull long before it was completed. If you haven’t deadlifted before, it’s impossible to comprehend the mental strength that was necessary to finish the lift.

I’m certainly not suggesting that you fight through 13 seconds of pain during each lift that you perform. The take home message is much simpler than that. If you are serious athlete, you must be dialed in mentally if you wish to even approach your potential. Plenty of strength has been left on the table simply because an athlete didn’t believe in himself or didn’t realize that it was already present.

Most of us will never lift the loads that Paul Anderson lifted, but we can all learn from his example and wisdom. If your mind isn’t willing and ready to exert the necessary effort, it won’t matter how many grams of protein you’ve consumed or whose training program you follow. Eventually, you will plateau long before you’ve even approached the neighborhood of your true potential.

“Mental toughness is to physical as four is to one.” – Bobby Knight