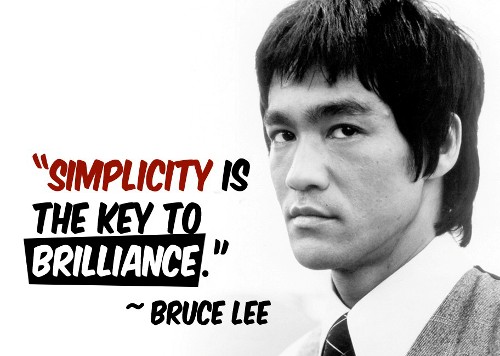 As each year passes, I become increasingly fond of a simple approach to exercise. I say this as someone who once went through my own phase of complex programming. During those formative years, I split hairs over decisions that I eventually realized were insignificant. I now train with a style that is as simple as ever, yet just as effective as anything I’ve ever done.

I share this not to suggest that you should train haphazardly, but instead to emphasize more important variables. Speaking for myself, each year seems to pass faster than the one before. When I see pictures of my children, I am constantly amazed at how fast they have grown. It seems like it is only a hop, skip, and a jump away before they’ll be headed to college. The last thing that I want before that time is to be lost in paralysis by analysis with my own training. I’d much rather work hard with a smaller group of exercises that I enjoy without beating my head against the wall over trivial details.

Although I have simplified my approach, my belief in hard work has not changed. I just don’t spend as much time worrying about how that work will be applied. As long as I am consistent and diligent, I know that I can stay in shape without hindering other aspects of life. In other words, I can continue to thrive physically without life passing me by.

As for inspirations to my philosophy, there is no denying that the age-related section within my own blog has been a motivator. I first created that section to inspire readers of the site, but the stories actually served to motivate me as well. Seeing countless examples of men and women who have thrived in their 60s, 70s, and beyond has undoubtedly influenced me. I hope to one day create a video that is similar to what can be seen below.

Take a look at the latest addition to the age-related archives. Within the video, you’ll see 80 year old Walt Ottenad Jr. perform 500 pushups in approximately 30 minutes.

This 80 year old Marine has kept himself in excellent condition. I don’t know much about him, but it’s safe to say that he grew up in a much different world from what we see today. He certainly performed his share of calisthenics while serving and has continued to do so throughout life. No one knocks off that number of reps at 80 without years of practice beforehand.

Thus, while there are clipboard trainers who may critique his technique or argue about alternatives, I’m guessing that few will be as capable as Walt if they are fortunate to live 80 years. As an old saying suggests, actions speak louder than words and Walt is clearly a man of action. He continues to work while others debate what should or shouldn’t be done. I see him as a huge inspiration in that regard. I also plan to keep working without worrying about what others believe to be optimal. As long as I work hard and remain consistent, I’ll take my chances doing what I enjoy.

If my last 20+ years of training have taught me anything, it’s that the specifics matter less than the conscious effort to regularly apply yourself diligently and effectively. Put in the work and don’t get lost in complexity. The results will eventually follow and you’ll have plenty of time to enjoy life outside the gym. Training is intended to improve our lives. It shouldn’t take over your life and control it.

“None are so old as those who have outlived enthusiasm.” – Henry David Thoreau