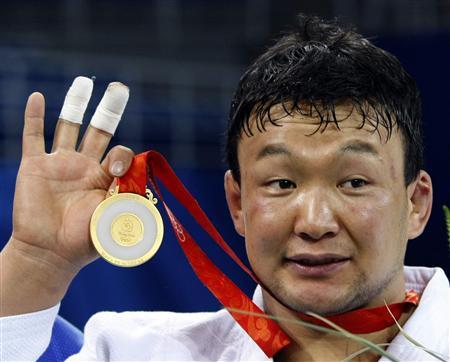 If you have followed this blog for any amount of time, you know that I am a fan of keeping things simple. I firmly believe that an athlete’s strength and conditioning needs can be fulfilled without an elaborate facility or routine. I also believe it is important to observe and learn from other successful athletes. With that in mind, I thoroughly enjoyed watching the videos that follow. The two clips analyze the success of judo in Mongolia.

Plenty can be learned from studying this footage whether you are interested in judo or not.

At first glance, you may be wondering what’s the big deal about Mongolian athletes excelling in judo? Before you close this entry, let me explain…

For starters, the entire country of Mongolia has a population of less than 3 million. To put that number in perspective, the small state of Massachusetts has more than twice the amount of people. In other words, the Mongolian athletes must be doing something right if so many are excelling from such a small population. These athletes have also managed to succeed without the elaborate facilities that are common in more densely populated areas.

What is the Secret to Their Success?

Fortunately, there are no secrets. For starters, these athletes work extremely hard practicing their sport. They do not get sidetracked by too much supplemental work. The bulk of their time and energy is expended on the mats. That is where they master their techniques and also develop the ability to execute those techniques in the face of fatigue.

Many of these athletes have also developed strength from their surroundings. For example, in the second video, you will hear from one of the Mongolian champions (Khashbaataryn Tsagaanbaatar). At approximately the 4:30 mark, he states the following:

“My muscle was developed in everyday life.”

The narration continues by stating that many of the Mongolians have developed their legs by living in nature.Â  They are regularly on the move and quite active outdoors. The Mongolians are hard working people who live the opposite of a sedentary lifestyle. Physical activity and work is part of their lives.

As for conditioning, these athletes work hard with the basics. If you refer to the 6:50 mark of the second video, you will see them about to begin a challenging mountain run. The air is both thin and cold but it does not deter them. These are not soft athletes who have been spoiled with lavish amenities. On the contrary, these Mongolians are hardened athletes who are physically and mentally strong.

In many ways, their training reminds me of another judo legend. Long time readers of the site may recall seeing a short documentary about the legendary Masahiko Kimura (see here). Kimura is considered by many to be the greatest judoka of all time. His training approach was also rooted heavily in sport training and low-tech conditioning. He did not just train the body, but also the mind. He pushed his athletes to levels that most people would struggle to comprehend.

Such an approach is certainly not required or suggested for general fitness, but is often necessary for high level combat athletes. Developing mental toughness is just as important as any physical quality. The body is only as strong as the mind that controls it. Once your mind starts to break, it is only a matter of time before the body does too. Training in harsh elements such as the cold allows one to develop the body and mind. It is impossible to separate the two when you are battling fatigue and the harsh elements around you. Speaking from experience, some of my most challenging conditioning sessions take place in the winter. I do not need any fancy exercises to create an extremely challenging session (ex. see here).

In summary, plenty can be learned by studying successful athletes who have thrived in rudimentary environments. Once all the gadgets and gizmos have been stripped away, you can see what really works and what is ultimately responsible for the success of such athletes. Hard work with the basics will always be a recipe that produces results.

“I have just three things to teach: simplicity, patience, compassion. These three are your greatest treasures.” – Lao Tzu