Earlier this week, I wrote about the success of Mongolian athletes in judo (see here). As discussed throughout, the Mongolians work hard and possess extreme mental toughness. These athletes have excelled at the international level despite training with what some would describe as a rudimentary style. For example, in the documentary that I shared, you will see a group of athletes running a mountain and then performing pushups at the top. I’m guessing some readers were expecting a more elaborate approach. 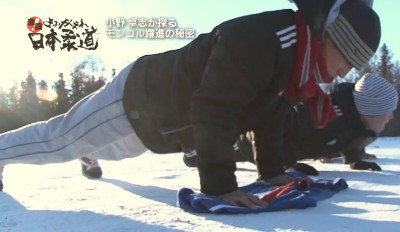 To no surprise, it did not take long after I wrote the entry to find some snide remarks about it. One comment read as follows:

“Running and pushups, yippee. Show me something that I don’t know.”

Complexity Does Not Equal Success

Some might argue that such comments are not worthy of attention, but if you overlook ignorance, you allow it to spread. One of the fundamental problems with the fitness industry today is the myth that more complexity equates to more success. This notion could not be further from the truth.

Flashy exercises may attract more attention, but rarely will such movements provide the benefits of those exercises that have stood the test of time. It is much easier to criticize a Mongolian athlete who runs and performs pushups than it is to get off your ass and join them. Anyone with a keyboard can become a critic. There are no other prerequisites. Unfortunately, banging on the keyboard will not improve your ability to run steep mountains and perform hundreds of pushups in the cold.

Knowledge Does Not Equal Power

Another myth that has been spread through the online era is that knowledge equals power. Regrettably, it will take more than knowledge for you to become stronger and better conditioned. Without action, knowledge will always be limited.

For instance, the pushup is perhaps the most recognizable exercise in the world. Almost every adult has performed a pushup at some point in their life. Yet how many adults are highly capable of performing continuous pushups? You’ll be hard pressed to find even a handful of adults in everyday life that can perform 50 reps. In other words, knowledge of the pushup does not equate to performance with the pushup.

You Can’t Handle The Truth 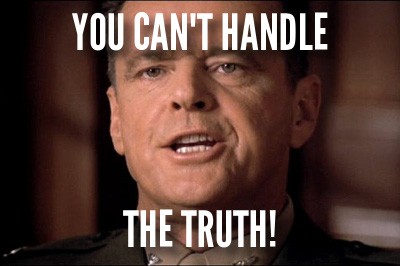 High levels of strength and endurance are rare. If you are genuinely strong or well conditioned, you are in the minority. Ironically, there is an abundance of information online about becoming stronger and better conditioned. Therefore, the problem is clearly not related to a lack of material. If anything, there may be too much information. Everyone and their brother seem to be inventing new exercises these days. I’d bet that more exercises have been invented for Instagram videos in the last year than the combined number of exercises created over the previous 100 years.

Most of the people inventing these ridiculous exercises don’t actually train anyone however. They are more concerned about attracting attention than they are about developing real athletes. Unfortunately, the fitness novices of the world take the bait and fall into their trap. These individuals constantly seek out new exercises. Whatever they have seen or read is never enough. They always feel that they are missing what is necessary to become stronger or better conditioned.

The reality though is that they already have what they need. Lack of knowledge is not the problem. Instead, the problem lies within the individual. It is much easier to blame your failures on a lack of knowledge as opposed to a lack of effort. It’s a hard pill to swallow for anyone to accept that they didn’t put in the work. And that’s why there will always be more people who are weak than those who are strong. It’s human nature to place the blame elsewhere rather than looking in the mirror.

Real trainers are not paid to invent exercises. We are paid to develop and improve our athletes. With that in mind, we are certainly open to new ideas, but also cognizant of the fact that new ideas rarely replace those that have already proved to be effective. Speaking for myself, my training approach is clearly rooted in the fundamentals. I don’t care if the exercises that we perform appear flashy or not. I’m not looking for style points and I don’t care if the exercises are new or old. I am only concerned with what works. And in my 20+ years of training, I continually reap rewards from time tested exercises that would appear basic to many casual observers. What these observers fail to realize however is that your greatest effort will eventually succumb to even the most basic exercise.

When the Mongolians run hills and perform pushups, it may not look flashy but you can be sure that it is effective. No one will ever outgrow the fundamentals. These so-called basic exercises will eventually challenge even the most highly conditioned athletes in the world. As I’ve said before, how you do what you do matters more than what you do. The job of a trainer is to maximize the how you do part of the equation. Getting my athletes to apply more effort to basic exercises has always been a recipe for success.

Some athletes may initially doubt such an approach, but it doesn’t take long from them to have a change of heart. I always enjoy working with new clients who have previously trained at state of the art facilities. I usually introduce them to my style by meeting them at the bottom of a mountain road. When they first see me, there is often a look of confusion. They aren’t sure if it is some type of joke. It is at that point when I smile and start running. That’s when they know it is for real. Once we are finished training at the top of the mountain, there is always a look of shock. They aren’t sure what the heck just happened. And even if they did know, the lack of oxygen makes it difficult to formulate complete sentences.

That’s when I smile again and welcome them to the old school.

Related Entry: Rooted in the Fundamentals

“History is filled with brilliant people who wanted to fix things and just made them worse.” – Chuck Palahniuk