A Beijing SWAT team member (Mao Weidong) recently destroyed the world record for the longest plank. He held the position for 4 hours and 26 minutes. 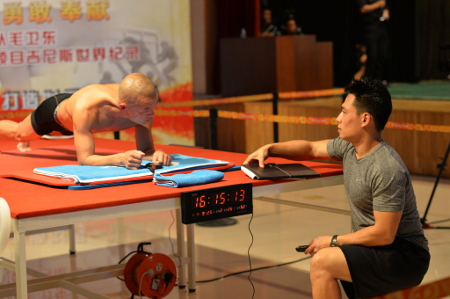 Unfortunately, it did not take long after the record was set for people to begin posting snide remarks about it. My own inbox has even been filled with questions and comments about the significance of Weidong’s feat. For instance, many consider the plank to be a low level core training exercise so wonder why anyone would waste so much time holding this position. Others have been more blunt in telling me that the plank is a worthless exercise and that Mao Weidong should find something better to do with his time.

Personally, I am not so quick to dismiss the significance of a 4+ hour plank. Whether you like the exercise or not does not diminish the difficulty of holding this position for such a lengthy time. In other words, regardless of how you rank the plank as an exercise, it is not easy to hold this position continuously for even a fraction of Weidong’s time. Therefore, while I am not suggesting that we all sleep in the plank, let’s at least give credit where credit is due and take what we can from this example.

For starters, I agree that there are better core training exercises than the plank. There is a long list of movements that I would rank higher in terms of effectiveness and time efficiency. The plank still offers some benefits however. And perhaps the greatest benefit in my opinion has nothing to do with core strength. The plank can be a useful exercise simply because of the mental challenge that it presents.

Anyone who has ever held the plank has reached a point where the mind begins to believe that you can no longer continue. In layman’s terms, we have all reached a point where we had to suck it up and resist the temptation to come down from the position. During such times, the plank becomes more of a mental challenge than a core exercise. You either have the mental toughness to keep going or you don’t. It is as simple as that.

I am sure that many readers are thinking it, so let’s get it out of the way. Yes, there are several other exercises that also require mental toughness. I am certainly not suggesting that the plank is the crème de la crème from a mental toughness perspective. I will be the first to admit that I do not spend a lot of time holding the plank. If I include the exercise, I prefer working with more difficult variations. For instance, I might wear a significant weighted vest and use the plank as a finisher at the conclusion of a workout. I do not have hours to invest in testing my plank endurance so I would rather perform a more challenging and time efficient option.

I do enjoy the mental battle that a difficult plank provides. Getting yourself used to regularly fighting through the natural urge to stop a challenging exercise or experience is a tremendous way to build mental toughness. And in many athletic events it is mental toughness that separates champions from contenders. All athletes will eventually face pain and fatigue. How you deal with these variables will often dictate your success or failure.

Less Can Be More

One knock that I often see against the plank is that it is not a very productive exercise. I have already stated that it is not the best core training exercise, and others often dismiss the mental challenge of holding this position. For example, it is obviously more difficult to fight through pain in the 12th round of a championship fight than it is to hold the plank. I don’t necessarily view that as a con however. It is useful to have mental challenges in our arsenal that do not beat us down. I can challenge myself with a weighted plank where I must literally fight with every ounce of physical and mental strength to prevent myself from coming down. The mental challenge is real, yet I am able to quickly recover from the exercise without any pain or soreness. That’s a huge plus, particularly since I am not using the exercise as a staple in my core training arsenal.

In summary, Mao Weidong clearly possesses a high level of physical and mental strength. Four hours and 26 minutes is an incredibly long time. I have seen many high level athletes struggle to hold the plank for 4 minutes and 26 seconds. Weidong has taken this exercise to another level. The mental toughness that he has displayed would be beneficial to athletes involved in any event. Whether you enjoy the plank or not, it would be foolish to minimize the difficulty of his accomplishment.

“Endurance is one of the most difficult disciplines, but it is to the one who endures that the final victory comes.” – Gautama Buddha