Earlier this week, I posted a short Instagram clip of me skipping rope while blindfolded. Since I was wearing a Superman shirt, I jokingly mentioned that I was testing my x-ray vision. Afterward, I received a few emails from athletes who were curious if the blindfolded work was performed as a joke or if there were actual performance benefits.

To answer the question, I did post the clip as a joke, but there are potential benefits to performing certain skills while blindfolded. I first read of blindfolded practice many years ago in Mel Siff’s classic Supertraining text. His writings brought back memories of movies such as Bloodsport. If you recall the 1988 film, you may remember seeing Jean-Claude Van Damme practicing with a blindfold. 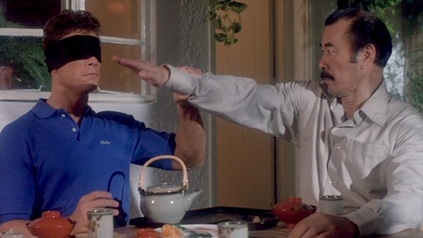 Blindfolded practice goes far beyond any Hollywood movie however. For example, Mel Siff highlighted the potential of such work to enhance proprioceptive efficiency. In layman’s terms, proprioception is our sense of position and movement. It has been described as our sixth sense. In other words, we don’t just see, hear, smell, touch, and taste. We also possess a sense or awareness of the position of our bodies.

As for relevance to training, Siff wrote the following:

“The integration of information from all the other senses (sight, sound, hearing and touch, in particular), together with this proprioceptive information enables us to execute a given movement in the most appropriate way in terms of pattern, velocity, acceleration and timing. This involves coordination of eye-hand, eye-foot or body-apparatus, processes which receive a great deal of attention in technical training. Inadequate time, however, is generally devoted to specific training of proprioception…

One way of improving proprioceptive efficiency is to diminish or block input from other sensory systems such as the eyes… Research has shown that blindfolding does not disrupt motor activities; on the contrary, it has been found that exercises are performed with greater precision and stability when the eyes are closed or in darkness. The athlete remembers joint angles, the degree of muscular tension, the amplitude of movement and movement patterns best with the eyes closed and reproduces them more easily. Subsequently, when the movements are done with the eyes open, the athlete’s enhanced motor sensitivity is preserved and his technical skill improves.”

With this in mind, it can be useful to briefly practice certain skills blindfolded. Jump rope training is one of many examples. Initially, you may find yourself drifting off in one direction. Shadow boxing for a fighter is another useful option. Many fighters will be surprised at how their balance fails when throwing combinations without vision. A few minutes of light practice can certainly prove useful. Siff even mentioned practicing Olympic lifts and powerlifting movements without vision.

In summary, I am not suggesting that you should always train in the dark. Blindfolded work does pose a unique challenge however that can enhance qualities that are otherwise ignored. Just a few minutes, a few days per week, is often all that is necessary.