As a father to a girl, I always tell my daughter that she can do whatever she sets her mind to do. She has no concept of there being any limitations because of gender. She has grown up playing sports with her older brother and has turned into a gym rat. A day does not pass without her asking to play in the gym. 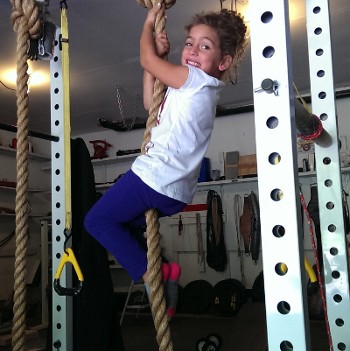 Yet, while she calls it play time, my six year old will be the first person to tell you not to talk to anyone who is in the middle of a set. She is well aware of the unwritten rules of the gym. She is not there to socialize. She is always doing something. Whether she is jumping rope, climbing rope, or playing with the bars, she keeps herself busy and is always looking for a new challenge. If I had a nickel for every time she asked for five more minutes in the gym, I would have at least one year of her college tuition saved in the bank.

Unfortunately, it seems like my daughter’s interest in sport and exercise is somewhat unique. As a coach in the community, I rarely see young girls who are as eager to participate and play. It seems as if many girls are steered away from such activities. It is much more common to see fathers out on the field with their sons. I’ve even seen parents who have sons and daughters who bring their boys to practice while the young girls sit on the sidelines and play with electronic devices.

I could not imagine leaving my daughter on the sideline to play with my phone while I am on the field with my son. What message are we giving our daughters if we make them sit out while the boys practice on the field? I want my daughter to participate. I would rather have her struggling to keep up with the older boys than sitting around doing nothing.

If more parents encouraged their daughters to compete without limitations, we would not be surprised at videos such as that below. Take a look at one girl who just finished her first summer of calisthenic training.

This young woman cranks out muscle-ups with ease. And this is all just after one summer of bodyweight training. Imagine what she will accomplish after a year or two of serious training? The sky is truly the limit.

Not at all. Why should I be surprised? Who said that women cannot perform exercises such as muscle-ups? Anyone who utters such a statement is a fool. I always tell my daughter that she can accomplish anything she wants to accomplish. Sure, she will fail at times. We all fail. I have failed more times than I could ever remember. Failure is often one of the most important stepping stones toward success. If you are ambitious, failure comes with the territory. Don’t run from it. Learn from it.

In summary, stop telling children what they can or cannot accomplish. Encourage them to try and let them chart their own course. We owe them that right. Every individual has a right to live their own lives and pursue their own dreams. I have no idea what my daughter will pursue as the years pass, but I will surely be by her side encouraging her each step of the way. No one will tell her what she can accomplish. She will find out for herself.

“Argue for your limitations, and sure enough, they’re yours.” – Richard Bach