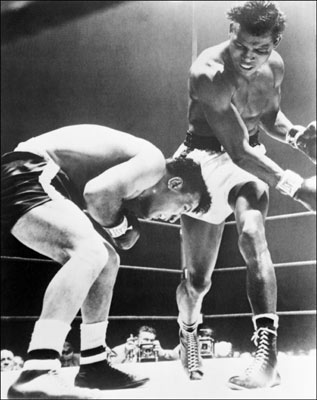 The video below was recently passed along to me and is well worth a look. First and foremost, the presentation itself is quite interesting. In many ways, today’s athletes have not advanced nearly as much as the average person believes. And while I would have preferred to see more attention directed towards performance enhancing drugs, I suppose such aids classify as a technological advancement.

More importantly however, the topic of athletic progress is actually relevant towards exercise and training. This is particularly true for the Average Joe who does not compete as a professional athlete. There are countless trainers today who live under the false assumption that athletes from previous generations were archaic with their methods. They naturally assume that today’s athletes have evolved above and beyond those from the past. As a result, they spend little time studying those who came before.

The reality though is that not all sports have experienced the same level of technological change. For instance, consider sports such as boxing and wrestling. Does anyone truly believe that a prime Dan Gable could not compete with wrestlers today? Yet, when you look back at his training style, there was nothing revolutionary about it. Gable simply outworked everyone. He was not a product of technology, but rather one of ridiculous work ethic and effort.

Similar arguments could be made in regards to boxing greats such as Sugar Ray Robinson. Once again, his training style was not revolutionary. He trained hard with his sport, fought regularly, and was obviously talented. He did not have any strength and conditioning specialists or any of the other so-called advancements that are present in most modern camps. Yet, despite his rudimentary approach, the Ray Robinson who fought professionally over 70 years ago could contend with any of today’s top fighters.

In summary, the take home lesson for the typical exercise enthusiast is fairly straightforward. Don’t be fooled to believe that the old fashioned approach to exercise was not effective. I don’t know too many people who wouldn’t want to be as well conditioned as a prime Ray Robinson or Dan Gable. When you strip away technology and performance enhancing drugs, the athletes from the past were not nearly as far behind as many would like you to believe.

This is not to say that there aren’t ways to improve on certain methods from the past, but it is difficult to improve on something that you don’t know. Thus, while it is obviously important to study the present, it is often equally useful to study the past. Human intelligence is not new. Plenty can be learned from athletes and coaches who excelled in previous generations without the technology that exists today.

“The future, according to some scientists, will be exactly like the past, only far more expensive.” – John Sladek