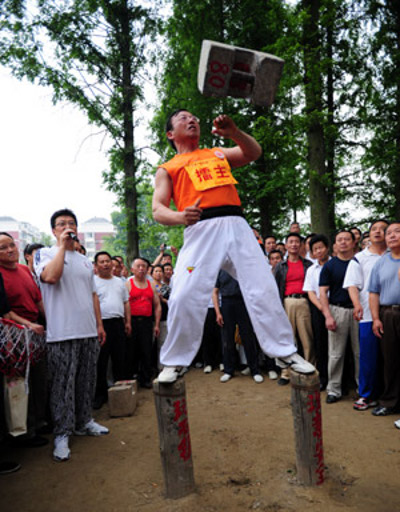 Below is a video about a 64 year old man whose physical ability is beyond inspiring. The 22 minute documentary includes English subtitles and is well worth a look. Don’t let the language barrier cause you to miss out on a tremendous story.

I am not easily impressed but 64 year old Wang Bingrong certainly has my attention. He possesses a rare mix of strength, endurance, and coordination. The feats that Wang performs with heavy padlock weights are truly incredible.

What I enjoyed most however is the story of Wang’s transformation. It was not long ago that he suffered from severe ulcerative colitis. He nearly drank himself to the point of no return. At one point in the film, Wang discusses how he could hardly walk a flight of 36 steps. He actually had a rail installed so he could hold on and pull himself up one step at a time. He was a physical mess.

Upon hitting rock bottom, Wang realized it was time to change. He began training at a local park and alone in his basement. He slowly rebuilt his body and gradually learned several awe-inspiring feats with the stone padlocks. He now hoists considerable weights in each hand with relative ease.

As for those wondering the size of each padlock, they are labeled in jin. One jin is equivalent to approximately 1.1 pounds. In other words, Wang is not hosting around baby weights. He is moving considerable weight with incredible coordination and accuracy.

Wang’s story not only highlights human potential, but also the ability to reinvent ourselves at any time. It is safe to say that we’ve all had ups and downs at one point or another. Wang Bingrong was on the verge of drinking himself to death before deciding to change. Anyone who saw him unable to walk a flight of steps at age 50 would never believe he’s the same person at age 64. He has completely reinvented himself and he didn’t need anything fancy to do so. He worked hard in a park and alone in his basement.

There is no secret to his transformation. He decided to change and never looked back. He was diligent and consistent with his efforts. If you’ve ever doubted the potential of hard work and consistency, look no further than Wang Bingrong.

As evident by his example, it is never too late to change.

“Nobody grows old merely by living a number of years. We grow old by deserting our ideals. Years may wrinkle the skin, but to give up enthusiasm wrinkles the soul.” – Samuel Ullman