When discussing low-tech training strategies, one of the most common examples comes from the ancient wrestlers of India. Kushti, the traditional form of Indian wrestling, has existed for thousands of years. In fact, two of today’s popular bodyweight exercises originate from these wrestlers. Both Hindu pushups and squats (rightly known as dands and baithaks) have essentially become household names amongst exercise enthusiasts. 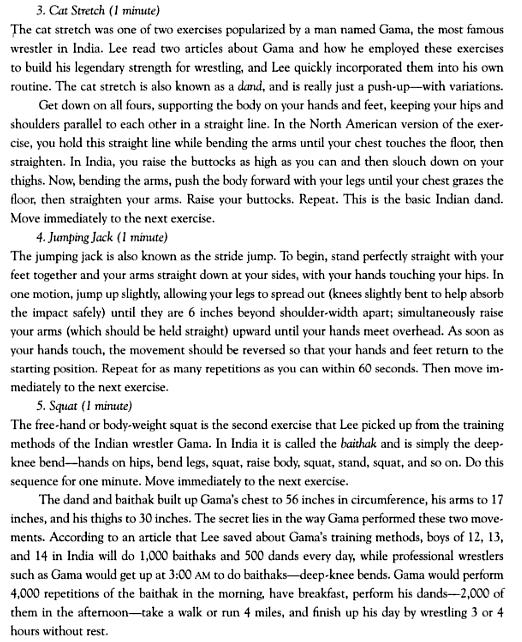 As for additional Kushti training strategies, Vincent Giordano has created two DVDs that feature modern Indian wrestlers preparing for their sport. And while his DVDs have been discussed on my forum in previous years, Giordano has recently released several outtakes from the original footage.

Below you can see part 1.

Five additional clips can also be seen at the following links.

As you will see throughout the footage, these wrestlers continue to thrive on an intense, yet basic form of training. They exercise with stones, clubs, calisthenics, and ropes. They also practice their sport regularly. Wrestling itself is a physically exhausting exercise.

Therefore, it is no surprise that the wrestlers seen throughout the clips are well trained, despite exercising in what many would consider a rudimentary environment. High-end equipment is nowhere to be found. If there was ever a case to be made for training with the basics, these wrestlers offer as good an example as any. The complexities that are so commonly argued by today’s trainers are nowhere to be found.

And while I am certainly not suggesting that we all train like Indian wrestlers, I believe it is useful to study athletes from different generations. Research involves much more than reading modern journals. It is difficult to improve on the past if you have not studied it. Plenty of coaches from today’s era would benefit by studying the habits of those from previous generations.

As for the average Joe’s who are looking to get in shape for every day life, these wrestlers offer yet another example of low-tech high-effect training that can be performed almost anywhere with almost anything (including nothing). Your ability to get in shape is not based on the equipment you use. It is based on your willingness to continually and diligently work with whatever is available.