No matter how strong you are, you aren’t stronger than you are. There will always be an exercise or weight that is beyond even the strongest man’s ability. Anyone who has ever lifted any meaningful weight has failed. The strongest person you know has failed. We all have failed. 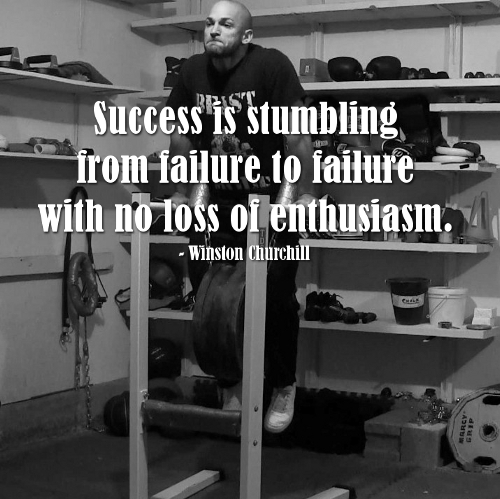 No one is ever too good to fail. Often times we must fail in order to succeed. The greatest athletes you’ve ever seen have failed and will fail again. And while these words may appear depressing at first glance, the opposite is actually true. A bad day in the gym does not signify that something is wrong. It simply reaffirms that you are human.

Unfortunately, many young athletes have been fooled to believe otherwise. They falsely assume that success brings with it immunity to failure. I hear from these athletes regularly. They write to me out of frustration whenever they miss a lift or have a bad day in the gym.

Just last night I received an email from an aspiring athlete who asked the following:

“Ross, I am trying to reach your level, but I occasionally have a bad day in the gym. What did you used to do when you had bad days? Did you push through it or train something else?”

This question was asked with a built in assumption that I no longer have bad days. I receive questions like this all the time. These athletes believe that something is wrong if they aren’t hitting personal bests every time they step in the gym. It doesn’t work that way. Let me remind you again. We all fail.

Earlier this week, I posted a video to Instagram of me performing dips with 225 pounds (see link below).

After posting the clip, I received several positive comments. A few people even suggested it looked easy. They don’t realize that I viewed that set as a failure. Instagram only allows for 15 second videos so no one saw what happened next. I had my heart set on hitting 5 reps. I failed on the 5th. I’m lucky the video cut off so no one could hear me afterward. I may have contended with CT Fletcher for the most F-bombs in a minute.

Fortunately, I am experienced enough to know that failure isn’t fatal. It’s part of the process. Anyone who knows how much they can lift also knows an amount that they can’t. It comes with the territory. I know I am close. Sure, I’ll get pissed off when I’m caught up in the moment, but it only takes a few minutes to get over it.

It was sometime last year that I did my first dip with 225 pounds. I was so excited when it happened. I had my eyes set on 225 for months. I’d made several attempts before and had always come up short. When I finally hit my first rep, I knew I had won. My previous failures were stepping stones. They were an integral part of the process. They were always there to let me know where I stood. Without an attempt, I wouldn’t have known.

Now that I am working towards 5 reps, my experience has been almost identical. I don’t fail all the time, as I certainly don’t set out to fail. It happens though. It’s part of the process. When I filmed the video above, I thought I had it in me. That’s why I tried. I was wrong. It wasn’t the first time and it won’t be the last.

If you are a young athlete, please heed this advice. You will never be too good for a bad day. It happens to the best of the best. We all have bad days. I have been in training camps with some of the best fighters in the world and even they have an occasional off day. They don’t panic though because they understand it comes with the territory.

In summary, please don’t misconstrue the message. I am not suggesting that you set out to fail. I don’t plan it in advance. I am ambitious however so there are times when I need to know what I can do. There is no formula in the world that is as accurate as trying. If I want to know what I can lift, I don’t reach for a calculator. I reach for the weights.

If an occasional bad days pops up out of nowhere, I don’t lose sleep over it. I hop back on the saddle and come back the next day. As I’ve said many times before, real strength requires an investment in time. There are no shortcuts. A few weeks or months is a blink of an eye. Don’t beat yourself up if you miss a lift or have a bad day. We are all human. Bad days are part of life. Don’t ever assume you are too good for them. Instead, stare them in the eye and keep on working. Consistent, diligent work is the best formula you’ll ever find for success. It isn’t easy though and you will fail. Accept it, deal with it, and keep on grinding.

“There is no failure except in no longer trying.” – Elbert Hubbard