Following the most recent entry about the low-tech training methods of fighters around the world, I was asked for additional examples outside of boxing. Fortunately, it is not difficult to find countless examples from other combat sports such as wrestling. As evident throughout the videos below, it is quite possible to become very well conditioned with little or nothing. 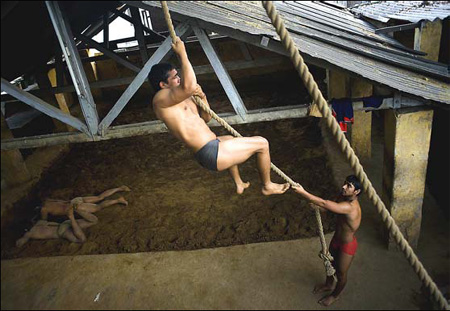 First, you can see a documentary about wrestling in Punjab, India.

Similar low-tech methods are also used in other parts of the world. For example, wrestlers from Dakar in Western Africa continue to thrive despite their lack of equipment.

It is also worth noting that such methods are not limited to wrestlers. For example, if you refer back to this entry about the legendary Masahiko Kimura, you will notice a similar theme (ie. hard work with the basics).

As evident in each of the above listed examples, the success of these athletes was not based on the equipment being used. What mattered more than anything was the consistent effort put forth towards whatever was available. As for general application, you do not need to be a martial artist to benefit from these examples. Contrary to what you may read elsewhere, getting in shape is not complicated. Do what you can with what you have and you’ll do quite well.

“It is vain to do with more what can be done with less.” – William of Occam