The video below highlights an early physical education program from La Sierra High School in California. As you watch the clip, you may be surprised at the physical ability of the teenagers seen within. Many youngsters today are not aware of the tremendous physical strength that was often on display in previous generations. As I have said many times before, strength is not new.

A related article from a 1962 magazine can be accessed by clicking the image below (courtesy of this site). 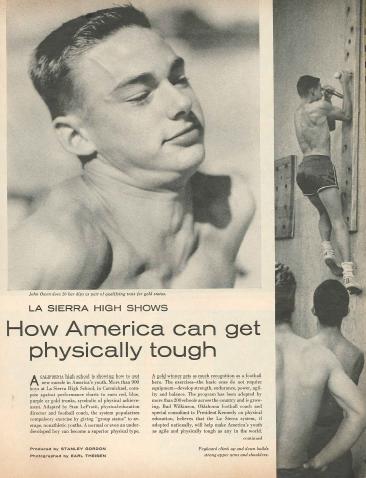 As I watched the video above, I wondered how many high school students today could perform such feats as easily as those seen throughout the clip. Call it a hunch, but I’m guessing the percentage is quite low. Today’s youngsters are more apt to play videos games than do anything that is physically challenging. Many schools have even removed physical education from the required curriculum. And while I could easily go off on a rant about our educational system, I will refrain from spiraling out of control in that direction.

There is more than enough to rant about by focusing solely on the physical ability of these teens from the 50s and 60s. So many of today’s young trainers and so-called gurus spend their days arguing trivial details regarding health and fitness. You know the type. They spend their days citing research conducted on three field mice to hide the fact that they can’t do anything remotely impressive and have never trained anyone. They’ll spend all day searching the PubMed database to find something that in some way justifies their latest argument.

Meanwhile, we can look back over fifty years ago to a much simpler time. The young men seen above thrived long before today’s supplement saturated world of fitness. These individuals didn’t spend their days arguing over rep ranges, supplement stacks, periodization models, and exercise equipment. They thrived on the basics. They worked hard. They remained consistent.

The results that came from their approach are easy to see. Hard work with the basics has always been an effective model for physical development. While many become lost in today’s often confusing and contradictory world of fitness, others continue to grind it out with a simple yet challenging approach. They don’t get lost in trivial details. They don’t succumb to paralysis by analysis. They work today, always eager to come back and work hard again tomorrow.

I doubt our nation will ever see a physical education program like that seen above, but we can still learn from their approach. The average person can do very well with a very simple exercise program. The specifics of the program usually means less than what the individual is willing to put into the program. A highly determined person who continually puts forth a true effort will succeed with almost anything.

Don’t get lost in the details and don’t be fooled to believe that you need all of the answers on day one. Start with the basics and expand your repertoire over time. The results will come soon enough as you continue to put in the work.

“People who pride themselves on their complexity and deride others for being simplistic should realize that the truth is often not very complicated. What gets complex is evading the truth.” – Thomas Sowell