Paul Drinan is a 68 year-old grandfather whose name was recently added to the Guinness Book of World Records. He set a new record by holding the abdominal plank position for 33 minutes and 40 seconds. A brief summary of the event can be seen through the video below.

I enjoy this story for several reasons. First, it is undeniably impressive to see a 68 year-old man in such tremendous condition. In addition to his recent plank record, he’s also performed 101 consecutive pushups and 29 pull-ups (both records at his local gym).

His 33+ minute plank is perhaps most impressive though, as he just began preparing for the challenge earlier this year. After witnessing a younger instructor hold the plank for 12 minutes, Paul thought he could do better. He began practicing the exercise as a result. His practice obviously paid off as he not only set the gym record but also a world record. 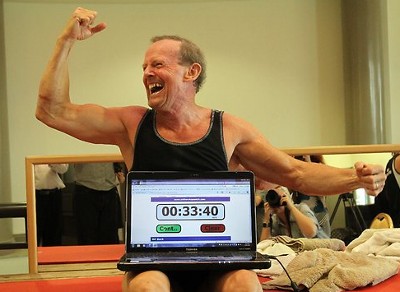 There are athletes half Paul’s age who would struggle to hold the plank for a fraction of the time. I’ve seen competitive athletes crumble under the plank after a few minutes. Many could likely do better than they initially realize however. Unfortunately, people often fall far short of their potential.

Such limitations are often the result of expectations. Google the plank and you’ll find several sites suggesting that you work up to a minute or two Paul Drinan never started with such low expectations. He saw someone hold the exercise for 12 minutes and believed he could do better. He didn’t begin with someone else telling him what he should strive to achieve.

There is plenty to learn from his record breaking performance. Don’t get me wrong, I’m not suggesting that you sleep in the plank. Personally, I find the exercise incredibly boring when held for longer durations. I prefer working with more difficult exercises. I don’t begin by imposing limitations on myself however. I’d rather be stubborn like Paul, and assume that I can do better than what I’ve see done by others.

Paul is obviously in excellent physical condition, but he also possesses unusual mental toughness. When the mind refuses to quit, the body tends to come along for the ride. Just because something becomes difficult does not mean it is time to sit down and rush to the water fountain.

Gradually pushing yourself a bit further is the best way to separate yourself from the majority.

“Many of life’s failures are people who did not realize how close they were to success when they gave up.” – Thomas A. Edison