As a father of two, I’m amazed at how physically active children are by nature. My three year old son would play outside all day if we let him. He loves to run, jump, climb, wrestle, ride his bike, hit the bag, and throw the ball. 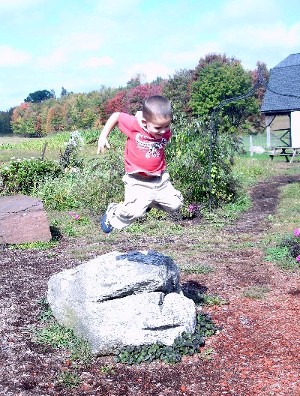 He often tags along at the gym and keeps himself busy by making up his own games and “moves” (as he calls them). When it is time to pack up and leave, he does his best to delay the exit. He always looks to extend the gym stay by a few more minutes.

My 15 month old daughter is following closely in his footsteps. One of the first things she wanted to do after learning to walk was put on her brother’s gloves and hit the punching bag. She was obsessed with her big brother’s gloves. My wife and I finally broke down and bought her a pair to help keep the peace. 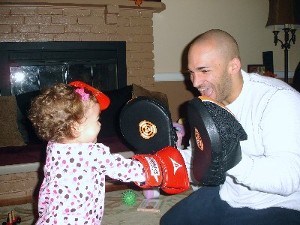 She now brings the gloves and mitts to me. She smiles and laughs as she plays with them. And just like her big brother, she too is sad when it’s time to put them away. I’ve learned to distract her when it is time to clean up, otherwise she would keep the gloves on all day.

I am not writing this entry to suggest that we push our kids to become champion athletes. If my kids want to play sports when they are older, I will support them, just as I’ll support them if they want to play the piano instead. I will never push them towards something they don’t enjoy.

Yet based on my own observations, it is clear that children imitate their parents. Their view of normalcy is based on what they encounter each day at home. I happen to be in the business of training fighters. My kids have seen fighters training here, and at the gym since day one. They are surrounded by a gym scene. It is both normal and fun to them. I first bought my son boxing gloves so he would stop taking dirty gloves out of the gym. He wanted to imitate what he saw around him. My daughter now imitates her big brother.

When my son was two, I asked him what he wanted for Christmas. He asked for a pull-up bar. Initially, I thought I misunderstood what he had said. But in fact he wanted a bar to imitate what he saw at the gym. Almost a year later, my son and daughter both pull at my leg to ask for a turn on the bar. We can’t get upstairs without one of them asking. 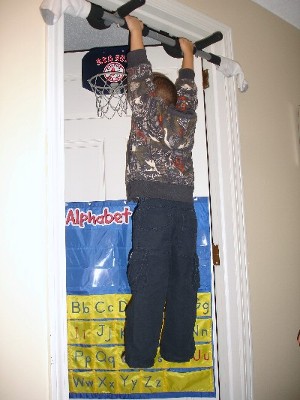 My kids find these physical activities enjoyable. I’ve never asked or pushed them to do anything. Kids by nature do what is fun. They will not actively do something that they do not enjoy. It is their nature to seek out and do what they find fun.

As a parent, it is my responsibility to prepare my children for the world around them. I don’t care whether they participate in sport or not, but it is important to foster physical, mental, and social development.

Unfortunately, many parents seem to believe their responsibility ends in the bedroom. I’ve met parents whose idea of entertaining their children is to sit them in front of the television. They don’t want to be bothered playing with their kids. They are too busy to play, yet oddly enough find time to update Facebook, track their favorite sporting teams, and keep up with their favorite television shows.

How do kids go from laughing and playing at the park to becoming sedentary, overweight teens and adults? It certainly isn’t natural. By nature, humans were born to move. Unfortunately, as children grow older, they are often encouraged to do otherwise. It’s easier to plop your kid in front of the TV as opposed to taking him outside to ride his bike or throw the ball.

Clearly, there are other causative factors, but the inactivity of our children is without question a contributor to the continuously increasing rate of adult obesity. Consider the link below for some recent statistics:

The Cost of Treating Obesity

It is sad to think that children who by their own accord would gladly run around all day will eventually become overweight adults. All too often parents look elsewhere for solutions, rather than taking a moment to ponder their own responsibilities. No one is more responsible for a child than the parents. It isnâ€™t the responsibility of the school or government to develop a healthy child. Parents must take it upon themselves. The ability to freely move and enjoy the world around is something that all kids should enjoy. No parent should deprive their children of this simple pleasure.

We as parents need to take it upon ourselves to foster an active lifestyle for our children. Making time for active play is the most enjoyable part of my day. I wouldn’t trade those smiles for anything in the world.

I’m amazed at what many consider to be such a complex topic (ex. childhood obesity) is actually so easy to correct. The first step is for parents to begin leading from the front. Is that really too much to ask? I can’t think of anything more important (to me) than my children and their health. How could any parent think differently of their own children?