Below is a link to a brief PDF that I wrote several years ago (2003) regarding homemade tornado ball options.

The ball seen below actually has the same basketball net from many years ago (seen within PDF file). 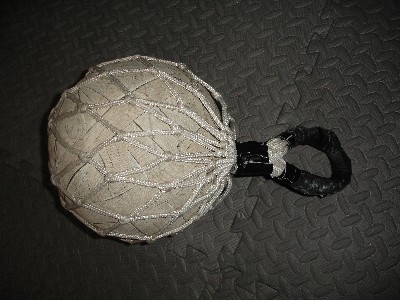 The difference is that I’ve now encased the net in a Gorilla Tape. I used an entire roll of tape for added protection. The tape makes this a permanent device.Â  The ball can no longer be removed.

I opted for a permanent device as I really wanted to protect the outer shell. As you can see, this homemade ball is 27.2 pounds. This is much heavier than most commercial models. With the added weight, you really need a strong outer layer to protect the ball.

The ball itself was made using the methods seen within this homemade equipment sticky:

I then added tape around the basketball. This was done initially to overcome the slickness of what had become a worn down homemade medicine ball. The original basketball had been used for a long time so the outer grip had become somewhat slick. I first covered the ball in Gorilla Tape and then added a layer of athletic tape as a more grip-friendly surface. You can see this white athletic tape in the first picture above.

The tornado ball handle is an old pants leg that has been wrapped around a piece of pipe foam insulation. The pipe foam added to the thickness of the handle. I then wrapped the entire handle in Gorilla Tape. A rope could also be used for the handle (and is obviously more convenient). I just happened to have the old handle from several years ago so made use of it.

Why Bother With Homemade Options?

I had a few other medicine balls available, so decided to convert the old ball into a heavy (permanent) tornado ball.

Most commercial medicine balls are quite expensive. When you add a rope to the ball, the price jumps even higher. With a quick search on Google, I found a 15 pound ball + rope for over $150. I prefer my homemade 27 pound model for several reasons. Clearly, my ball cost a fraction of this price. A 50 pound bag of sand is only a few dollars. The added weight is also useful when focusing on pure power (although lighter balls can be useful for other exercises). Perhaps the greatest benefit in my opinion is the non-bounding nature of the homemade ball. You can smash this ball as hard as humanly possible with minimal rebound at the bottom. This means swinging without fear of a bounding ball bouncing back into your face. Bounding medicine balls are not useful for slam/smash drills as it is natural to let up at the bottom to avoid being hit in face.

With a non-bounding homemade version, you can swing as hard as possible. This tool also comes in handy for those who would like to swing a heavy sledgehammer but do not have anywhere to use it. The tornado ball can be used on almost any gym floor. A matted surface is recommended if possible however (to avoid damaging the ball and/or floor).

For more information on sledgehammer training, please refer to these past articles:

If you already have a sledgehammer, you may be wondering if it is worth using a tornado ball. The two tools certainly appear similar, but each does have a unique feel. The tornado ball can also be used for several other exercises. Simply type “tornado ball” into the Youtube search engine and you’ll find several rotational exercises that would not be possible with the sledge (Youtube Tornado Ball).

In summary, I find both tools useful. We make regular use of the sledgehammer and tornado ball.

Here is a video demo of the downward slam.