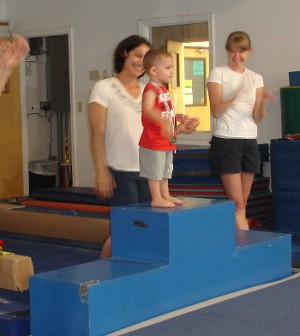 Just when I thought I had seen it all…

There are now people willing to take your money to test your child’s genetic potential (supposedly).

Born To Run? – Little Ones Get Test For Sports Gene

I strongly suggest reading through the full article at the link above.

After reading through it, I am happy to see that I’m not the only person who has several issues with this kind of test. For example, Dr. Stephen M. Roth, director of the functional genomics laboratory at the University of Maryland’s School of Public Health, had the following to say:

“The idea that it will be one or two genes that are contributing to the Michael Phelpses or the Usain Bolts of the world I think is shortsighted because it’s much more complex than that… Athletic performance has been found to be affected by at least 200 genes.”

Dr. Roth makes an excellent point. Athletic performance is an infinitely complex subject. It is not something that we can determine based on a single genetic test. There are countless factors to consider (such factors could fill an entire book).

Perhaps more importantly however, parents need to lighten up and let kids be kids. My problem isn’t necessarily the study itself or those involved with the study, but rather the message that it potentially sends. Why would anyone need to genetically test a 2 year old to determine his so called athletic potential? Would you actually stop your child from playing a sport that he enjoys because a genetic test says he will not excel?

Can you imagine telling little Johnny that he cannot play basketball this season as he is not genetically suited for the sport? What happens if he isn’t genetically suited to play ANY professional sport? Should we discourage him from participating in all sports? What happened to PLAYing sports because we enjoy them? Remember, PLAY is fun!

My son is 2 and a half years old. He is already in his second year of gymnastics. My wife does not take him to this class in hope that he’ll be a future Gold medalist however. He happens to enjoy the class, which is more important than his future in the sport! He also has a chance to interact with others his age. It’s a win-win situation in that it is fun and useful for his development (physically and socially).

As the kids get older, we won’t need a genetic test to know who is the fastest runner on the playground or the best baseball player on a little league team. Dr. Carl Foster (director of the human performance laboratory at the University of Wisconsin-La Crosse) outlined a much easier way to determine if a child will be good at sprint and power sports. In his words,

“Just line them up with their classmates for a race and see which ones are the fastest.”

Did we really need a doctor to come to this conclusion? As a kid, we held races at recess almost every day. That is what kids do! In the 4th grade, we had already figured out what it took a doctor to realize in the article above!

Simple observation is all that is necessary, but once again, kids shouldn’t play sports with the sole mission of becoming professional athletes. Sports are fun. Physical exercise and activities should be encouraged. Not everyone on the little league team is going to play major league baseball. We shouldn’t dissuade our kids from playing simply because they don’t have what it takes to perform at the professional level. If professional potential was a prerequisite, there wouldn’t be any youth sports teams. We’d be lucky to find a single player within each city.

It’s also worth nothing that 2 year old children are not old enough to specialize in a single sport. Perhaps the most important aspect of childhood development (athletically) is to play a variety of sports. Not many baseball players can run like Usain Bolt, but all baseball players need to run to first base after hitting the ball. Running is part of the sport, whether you are a slow first baseman or a swift footed centerfielder. Kids should run, jump, kick, throw, catch, and play! The time will come when they are old enough to specialize, but they will be much better off (better prepared) if they were allowed to participate in several sports as youngsters.

And let’s not forget that many athletes have disproven science. For example, the New York Times article above references one long jumper from Spain. According to genetic testing, he shouldn’t be able to compete, but surprisingly enough, he is the best jumper in his country. As one researcher said (when commenting on the jumper),

“We don’t yet understand what combination of genes creates that kind of explosiveness.”

Could it be that we aren’t as smart as we like to believe?

Wouldn’t it make more sense to instill a relentless work ethic within our youngsters? I’d rather have my son believe that he has the ability to defy his future critics (refer back to this entry on Conventional Wisdom for a related discussion). As has been said before, we often become what we believe.

Unfortunately, I won’t be surprised when certain parents who didn’t “make it” pass on their own failures by telling their children that they too cannot make it. They put all of their trust in science, and never even attempt to go against the grain.

As a trainer and coach, I have personally seen young fighters walk into the gym on their FIRST day who were everything but natural athletes. Any genetic test would have put these athletes at the bottom of the totem pole. But guess what, I’ve seen some of these very “unnatural” athletes become dominant fighters at both the amateur and professional level. They refused to believe the naysayers.

And please note, I’m not suggesting that certain athletes are not genetically superior. Usain Bolt is clearly a gifted sprinter, but there is still a very large middle ground for many sports (not all sports, but many). Many from this middle ground can become something special with a truly relentless work ethic, proper coaching, etc. These factors have nothing to do with the genetic hand that you are dealt. Regardless of what science suggests, we still have the ability to write a considerable portion of our future. It has not yet been determined and is entirely up to you (the individual).

As a parent, I will certainly pass this belief on to my children, and can only hope that others do as well.