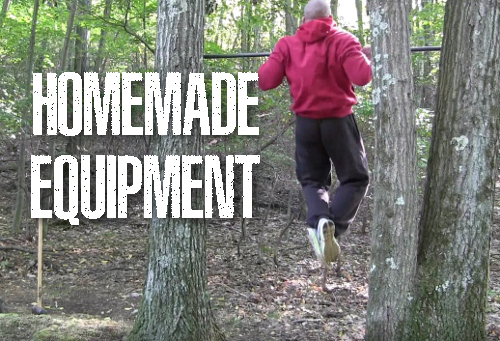 Anyone who knows this site has likely seen me train with homemade equipment. I was posting articles and videos about homemade gear before YouTube even existed. Now, many years later, I still demonstrate several low-tech options. For instance, I recently shared a short compilation of homemade tools that I’ve used over the years. And that particular video has brought loads of new traffic to the site. With that in mind, I believe it’s worth clarifying that although I’ve had success with homemade gear, I don’t post those videos with hopes that everyone will rush to the hardware store to build the same tools. There’s a more important message that I’d like to convey.

First, you’ll find the short compilation below. Long time readers of the site have likely seen much of the gear. Don’t expect anything fancy, but I will attest to the effectiveness of everything you’ll see.

As a professional boxing coach, I am not opposed to purchasing and using commercial equipment. I would never shortchange an athlete just to say we only use homemade gear. My focus is singular in that we will use whatever puts us in the best position to excel. It just so happens that much of the supplemental work that we perform (outside the ring) is relatively low-tech.

So, what’s the message behind me and my athletes training in a low-tech environment? The answer is simple. Don’t be fooled to believe that you need anything fancy to improve. If world class athletes can excel without a state-of-the-art facility, you can too. Intangibles such as effort and discipline will always be more valuable than even the most extravagant equipment and facilities.

Furthermore, even if there are tools that you’d like to purchase (but perhaps cannot currently afford), there’s still plenty that can be done without them. Never let your inability to do everything you’d like to stop you from doing anything. In other words, rather than worrying about what you don’t have make the most of whatever is in front of you. I’m a firm believer that there’s always someone out there doing more despite having less. Use that assumption to fuel your own fire.

Contrary to what you might believe, I’ve never been a fan of making homemade equipment. I don’t enjoy the process. There have been times though when what I envisioned or wanted wasn’t available commercially. When that happens, I apply a problem-solving approach and try to devise my own solution. And while there’s usually plenty of cursing that comes with that approach, I typically end up with something that works. It’s usually crude and everything but visually appealing, but it gets the job done.

And speaking as a coach, getting the job done is all that matters. It’s a result driven business. We don’t get extra credit for style and flash. No one cares what methods are used. All that’s remembered are the results you produce.