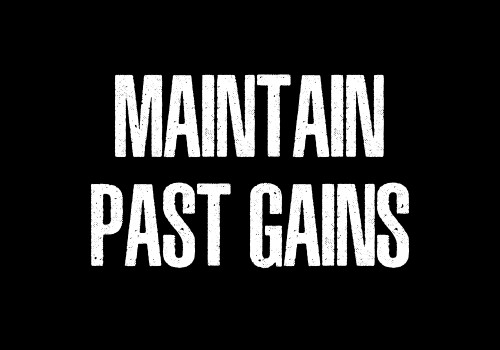 As a youngster, I never imagined that I’d be telling people how I’ve performed certain exercises for over 30 years. But here I am in my 40s, and I’m doing just that. As stated recently, my training has remained largely the same for many years. Yet, just because I tend to stick with movements that are familiar to me doesn’t mean that I no longer strive to improve. And that’s an important distinction to make based on one reader’s comment about my last post.

“So your goal is to maintain your fitness rather than to increase it? Don’t you plateau if you don’t strive for more reps, more difficult variations, etc.? Especially when you work with the same exercises for years.”

The assumption from this comment could not be further from the truth, but it also warrants a further discussion.

I’ve never met anyone who was opposed to becoming better (regardless of the goal). I certainly welcome any gains that come my way. I am however cognizant of the fact that gains don’t come as often to those who’ve trained consistently for many years. And the reason for that is quite simple. As you gain strength, it becomes more difficult to continue adding to the strength you’ve already developed.

For example, the strongest person in the world needs to work incredibly hard to become stronger. On the flip side, a beginner is much more primed to improve. I’ve even joked that a beginner could look at a barbell and gain strength. They can do almost anything in the gym and improve simply because they are starting from a lower level than a seasoned athlete or lifter.

Once again though, just because gains don’t come as fast to those who’ve been around the block doesn’t mean we aren’t still trying. We should always strive to improve.

Furthermore, it’s important to understand that maintaining the gains you’ve previously developed is an important part of training. Maintenance should not be viewed negatively. Being able to do the same things I did years ago feels just as good as any gain I ever made.

For instance, below is a brief example of a pushup flow that I recently shared. I demonstrated the exact same flow back in 2014 on YouTube. I can’t definitively say that my hands and wrists are stronger today than they were four years ago, but I do know that they aren’t any worse. At minimum, I’ve maintained the same lower arm strength and flexibility that I had before.

In my eyes, that is progress.

The take home lesson here is quite simple. We should all strive to improve, but also work hard to maintain what we’ve already built. Because like it or not, what goes up will eventually come down. Thus, if we can delay that descent, we’ve essentially turned back the hands of time.

In summary, don’t beat yourself up if you aren’t making constant gains week after week. Instead, recognize that gains don’t come as fast to seasoned athletes and lifters, but also embrace how positive it is to maintain what you’ve already developed.

And even if you’re shaking your head at the thought of maintenance, that’s okay because I once thought the same way. Now that I’m older and wiser, I recognize just how important maintenance is. Physically, I still feel like I’m in my twenties and I hope to maintain that feeling into my fifties and beyond. And while that may sound crazy, I’d rather be called crazy than ordinary!

“The most effective way to do it, is to do it.” – Amelia Earhart