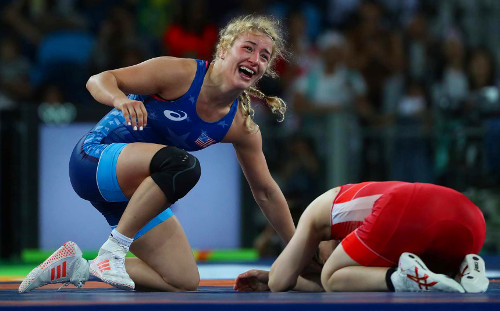 Last month I watched Helen Maroulis become the first US woman to capture an Olympic gold medal in women’s freestyle wrestling. Maroulis pulled off an incredible upset by soundly defeating Japan’s Saori Yoshida. Yoshida arrived in Rio as the most decorated athlete in freestyle wrestling history. She had already won three Olympic gold medals and thirteen world championships. Most experts favored her to win yet another gold medal in Rio.

Helen Maroulis had different plans however. She had one goal in mind and that was to leave Rio as a champion. Thus, while her victory may have surprised some of the spectators, it wasn’t a surprise to her. Maroulis has been defying the odds since she was a child, and that wasn’t about to change.

When I watched Maroulis compete, I was not fully aware of her past. I knew that she had just missed making the 2012 Olympic team, but I didn’t realize how rough her introduction was to the sport. The brief video below tells her inspiring story. I highly encourage you to set aside a few minutes to watch it.

In a world that’s filled with Kardashian-like television programs, it’s stories like that above that deserve more attention. Helen Maroulis is an Olympic gold medalist who once lost thirty matches in a row. It’s almost mind boggling to imagine a young girl losing so many times, yet still wanting to compete.

And wrestling wasn’t even the first activity that Maroulis struggled with as a youngster. Listen to what she says at the 1:43 mark in the video below.

Maroulis certainly isn’t what most people would consider to be a natural. She had to endure her share of bumps and bruises long before she became acquainted with the taste of victory.

So often the world sees a dominant athlete and fails to understand or appreciate the struggles that came before. All that’s visible is the end result. And often times, what someone becomes says very little about what they were before.

Helen Maroulis had a very rough introduction to the sport of wrestling. Many in her shoes would have quit long before they endured thirty consecutive losses. The fact that Maroulis continued to compete says a lot about her character. There’s obviously no quit in her.

Perhaps more importantly though, her story reminds me of hidden potential. During Helen’s early losing streak, I’m guessing that most coaches didn’t see her as a future Olympic gold medalist. The take home lesson therefore should be fairly obvious.

Never pay too much attention to someone else’s opinion.

Not everyone will become an Olympic gold medalist, but I’d bet good money that most people will never tap into a fraction of their potential. Some will give up, some will be talked into quitting, and others won’t put in the work that’s necessary.

Fortunately, none of those mistakes can happen without consent from the individual. Ultimately, it’s up to you to decide what you’ll pursue and how hard you’ll work.

“Never surrender your hopes and dreams to the fateful limitations others have placed on their own lives.” – Anthon St. Maarten