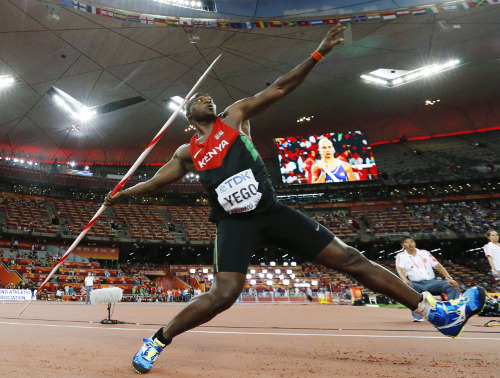 As a child, I was taught to make the most of what I had. I never wasted time wishing I had something new or different. Instead, I was encouraged to exhaust the potential of what was already available to me. Looking back, it is clear that my upbringing influenced my style as a coach and trainer. To this day, I take pride in my resourcefulness. Whether I’m training with homemade wheels, lifting heavy stones, or devising low-tech power exercises, I strongly believe that I can accomplish whatever I want with whatever is available to me.

Don’t just take my word for the power of resourcefulness though. If you need another example, look no further than Olympic medalist Julius Yego. His rise to Olympic glory is one of the most incredible stories I’ve ever seen.

As a youngster in Kenya, Julius Yego had dreams of becoming a champion javelin thrower. Unfortunately, Julius didn’t have access to a coach or even a formal place to train. That didn’t stop him though. Julius essentially taught and trained himself by studying YouTube videos.

The results of Yego’s hard work are impossible to deny. In 2014, Julius became the first Kenyan to win gold at the Commonwealth Games. A year later, he won the World Championships.

The video below tells his story. It is well worth a few minutes of your time.

Just last night (August 20th), Julius Yego captured the silver medal at the Olympic games in Rio. His silver medal was won with his first throw of the night. Julius was injured on his second attempt so was forced to withdraw from the competition.

I’m sure he’s devastated that he couldn’t complete each of his throws, but Julius should hold his head high knowing just how far he has come. To label his story as inspiring is an understatement. It is simply incredible that this man went from studying YouTube videos to becoming a world champion and Olympic medalist.

It might sound cliché, but there really is no time like the present. So much of the world’s potential is lost by people who mistakenly believe that they need something else to begin. The world would have never heard of Julius Yego if he waited to find a coach and world class facility for training.

Fortunately, Julius took it upon himself to begin training on his own. He didn’t have all of the answers when he started, but his ambition was enough to begin. As I’ve said before, it is difficult to stop a person who is determined to succeed.

When you want something bad enough, you’ll find ways to get it done. You might not have everything that you want or need, but that doesn’t mean you don’t have enough to begin. Doing something almost always beats doing nothing. Julius Yego started as a boy throwing sticks on his own, and became a world champion who has thrown his javelin in front of millions of spectators.

If that isn’t inspiring, I don’t know what is.

“Start where you are. Use what you have. Do what you can.” – Arthur Ashe