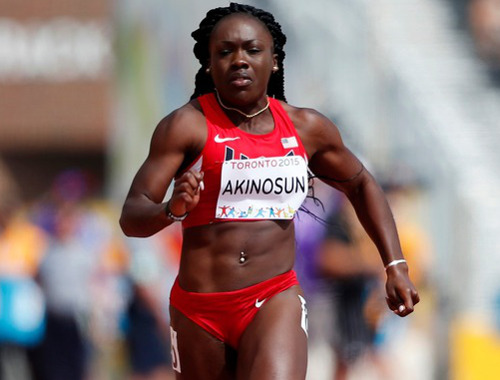 As a coach, I always tell my athletes to dream big and aim high. There’s no point (or value) in setting low expectations for yourself. Instead, it’s important that you hold yourself to a high standard. You essentially commit yourself to greatness. It’s almost like signing a contract to yourself that says you’ll do whatever is necessary to achieve and/or surpass your goals.

And while signing a contract to yourself might sound crazy, I think it’s crazier that so few people believe they can accomplish anything special. Since when did resigning ourselves to mediocrity become the norm? I’d much rather get my kids and athletes to set higher expectations for themselves. I’ll never cripple anyone by saying they can’t accomplish a goal. The world doesn’t need more dream snatchers. There’s already a surplus. What we need is more people who encourage our young athletes to believe in themselves and the hard work that is necessary to succeed.

One such person is 2016 Olympian Morolake Akinosun.

Believe it, Achieve it

Morolake Akinosun will soon represent the United States in the Olympic games in Rio de Janeiro. She will be part of the 4×100-meter relay team. She’s also scheduled to graduate from the University of Texas later this year. It’s not just her accomplishments that are impressive though. It’s equally impressive that she knew exactly what she wanted (and would achieve) while just a junior in high school.

Below is a screen shot of a tweet that she made in 2011. If you click on the image, it will direct you to Morolake’s Twitter page. It’s gone viral this week for good reason. It’s one of those feel good stories that worthy of a share. 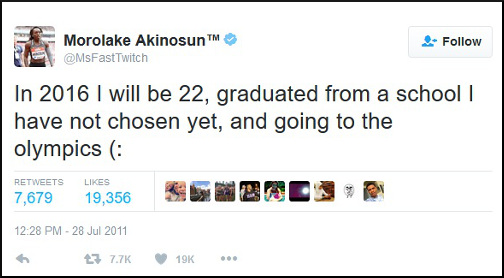 In describing the five years since proclaiming that she’d make the Olympics, here is what Morolake had to say,

“It wasn’t always easy… I put in a lot, a lot, a lot of hard work over the course of the five years, and I went after my dream.”

She also had the following advice for others,

“So if you have a dream, I want to encourage girls to go ahead and go after it, no matter how big it is, no matter how many people think your dream is unachievable. It’s yours – go for it.”

Those are wise words for anyone.

Speaking as a parent and coach, few things disgust me as much as hearing an adult tell a young athlete what he or she can or can’t achieve. The last thing we need is another generation who believes everything they’ve been told. Therefore, rather than telling a youngster what you think they can accomplish, encourage them to find out for themselves.

For the youngsters out there, always remember that someone else’s opinion is nothing more than opinion. It’s ultimately up to you to determine what you can or can’t accomplish. No one can do it for you, just as no one can predict the future. Your future is in your hands so never let a dream snatcher convince you to give up on something that matters to you. It’s your life and your choice.

“Being realistic is the most common path to mediocrity.” – Will Smith