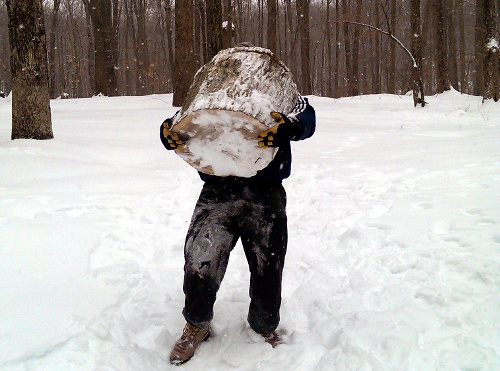 Over three years ago, I shared a brief article about carrying heavy sandbags. Loaded carries have long been a favorite of mine. The physical and mental strength developed by carrying heavy odd objects or weights is undeniable. Unfortunately, heavy carries remain just as uncommon today as they were when I wrote about them before. Although few will argue against the difficulty of a loaded carry, it’s rare that you see many people outside of strongman circles performing heavy carries on a regular basis.

Loaded carries don’t get much love because they are difficult and lack visual appeal. In today’s social media driven world, you’ll never get too much attention by walking around with a heavy log or stone. Take a look below for an example.

I’m not ashamed to admit that carrying a stone isn’t the most intriguing footage. That doesn’t take away from the physical and mental challenge however. Loaded carries will challenge you from head to toe.

When people ask me where they’ll feel the exercise working, my response is always the same. Everywhere.

Not a Number Game

Another reason that odd objects get overlooked is because they don’t come in standard weights. Every object that you lift will have a unique size, shape, feel, and weight. As a result, some people shy away from such work.

Whenever I lift an odd object, it’s all but guaranteed that someone will ask how much it weighs. I’m then greeted with strange looks when I say that I don’t know and don’t care.

All that matters is that the stone (or object) is heavy enough to provide a challenge. As I’ve said before, precise loads don’t matter. As long as you are challenged, you will improve (physically and mentally).

Another misconception about loaded carries is that you’ll need special equipment. After all, if you train at a commercial gym, odd objects might not be an option. You also might not have access to farmer walk handles.

Fortunately, there are still options available though. A basic farmer’s walk is still a tremendous exercise. All that you’ll need is a pair of heavy dumbbells. You can even add a weighted vest to the mix as seen below.

The combination of dumbbells and a heavy weighted vest make for an extremely challenging finisher. It doesn’t take long for this combination to get the best of you.

Another mistake that’s often made with loaded carries is the assumption that you must reconfigure your entire routine to accommodate the exercise. That’s entirely untrue.

I have performed loaded carries for many years and have never used even the slightest hint of complexity when programming the exercise. More often than not, I simply add a loaded carry as a finisher at the conclusion of a workout. I’ll either perform a few sets or see how much I can accomplish in a short block of time (ex. 10 minutes). It may not sound like much, but you’ll be surprised at how taxing 10 minutes of carrying can be.

Loaded carries can be added to almost any routine without interference. The simple addition of a brief finisher once or twice a week will prove to be extremely valuable over time.

Never be fooled to believe that an exercise must be flashy or visually appealing to be effective. A loaded carry isn’t a “hey look at me” activity. Instead, it is a simple exercise that builds real world strength. You’ll be hard pressed to find anything that’s as effective or efficient as a heavy carry.

“The loaded carry does more to expand athletic qualities than any other single thing I’ve attempted in my career as a coach and an athlete.” – Dan John