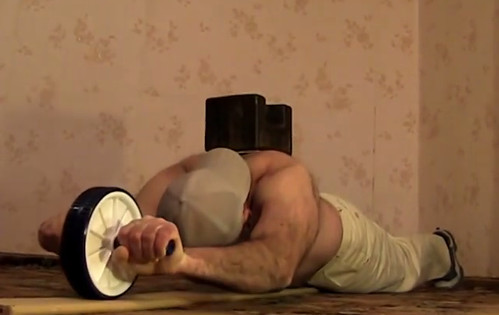 As a big believer in consistency, it is always nice to hear others share similar thoughts. One example that was recently passed along to me can be seen through the videos below. What you’ll see within is a man that has trained for thirty years who performs standing rollouts with ease. He also shares a few thoughts about another rollout variation that is a favorite of mine as well.

The gentleman seen below speaks Russian in each of the videos. Fortunately, a friend of mine was kind enough to translate the clips for me. In the first video, the man begins by discussing ab rollouts from the knees. Following a brief demonstration, he proceeds to discuss standing rollouts. He demonstrates full rollouts at approximately the 35 second mark.

Afterward, he mentions that he prefers another variation. That variation eliminates the ability to relax after each repetition. Rather than returning to the standing position, he remains horizontal throughout the set. In doing so, he’s able to maintain tension from start to finish. He demonstrates this exercise at approximately the 1:45 mark.

Another demonstration can be seen below. This time the man adds a 20 kilogram weight to his back. Before performing the exercise however, he mentions that any exercise can be dangerous, but it’s possible to progress gradually. He continues to state that he has been exercising for thirty years. He also mentions that if he becomes bored with a particular movement, he will mix in some variety.

It is certainly inspiring to see this man demonstrate such strength. It’s also great to see such a powerful example of consistency. I’m sure we’ve all known someone who has tried every ab device known to man, yet would break in half if he attempted the rollouts seen above. Clearly, less can be more when you work hard and remain consistent with those movements that offer the greatest return.

While I enjoy the variations seen above, I also enjoy adding a pushup (or pushups) to the exercise. The pushup/rollout combination targets the upper body as well. A single wheel also adds instability to the pushup, so the core remains challenged throughout.

A brief demonstration can be seen below.

In addition, if full rollouts are beyond your ability, you can alternate between kneeling rollouts and full pushups. For example, perform 3 kneeling rollouts before transitioning to three full pushups with your hands on the wheel. Continue back and forth in this fashion. It won’t take long for the upper body and core to be equally challenged.

Furthermore, if you don’t have a wheel, there are still options available for you. A few can be seen in the video below. A wooden dolly can also be used.

As discussed recently, there are plenty of ways to include subtle forms of variety. Clearly, the Russian man above has been consistent with the wheel. That type of strength isn’t developed overnight, nor is it developed by constantly hopping from one program to the next. It’s only developed through hard work and consistency over many years.

There are plenty of young readers who visit the site who can learn from his example. As mentioned before, less can be more. Don’t spread yourself too thin by trying to perform every exercise known to man. Plenty can be accomplished with a small number of quality movements. And if or when variety is needed, seek out subtle forms first, rather than constantly looking to reinvent the wheel.

“Growing old is a bad habit which a busy man has no time to form.” – Andre Maurois