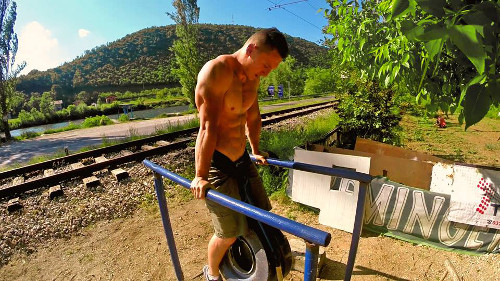 Over the years, I’ve highlighted several athletes who have thrived despite training in archaic settings without formal equipment. Today, I’ll add to the list by featuring a calisthenics athlete who is inspiring on many levels. This individual literally took it upon himself to create an environment that would fuel his passion towards bodyweight mastery. He built his own equipment and began training alongside an operating railroad track. The results that he’s achieved in the time since are nothing less than extraordinary.

As I watched the video below for the first time, I instantly thought of Milton Berle’s famous quote.

In today’s world, so many people waste time harping on what they don’t have. They’re always quick to provide an excuse about why they don’t do what they’d like to do. The man seen below is the polar opposite to that mentality. He didn’t waste time worrying about what he couldn’t do. Instead, he took matters into his own hands (literally).

A Man of Action

Plenty can be learned from this man’s example. First, he didn’t wait for an opportunity to come his way. A more logical choice was to act upon his desire. He knew what he wanted and wasn’t going to let a lack of equipment stop him. He also didn’t waste time lost in paralysis by analysis. Rather than worrying about what he could or couldn’t achieve with calisthenics, he opted to get busy and find out for himself.

So many people make the mistake of trying to figure everything out before starting a new journey. They fail to realize that there never is a perfect time. You don’t need to have all of the pieces in place to begin building a better version of yourself. As I’ve stressed many times before, doing something almost always beats doing nothing.

Consider the athlete above for a perfect example. I’m sure he has learned plenty since he first built his makeshift gym. We don’t need Captain Obvious to confirm that he knows more about training today than he did two years ago. He’s learned by doing. And while that may sound obvious, it’s important to point out that he didn’t need to know everything he knows now to begin. Instead, he was able to start with the basics and gradually evolve over time.

Unfortunately, countless others fail to take that first step forward. They become frozen by what they perceive as a lack of information. They always need to know just a little bit more before starting. And whatever they do learn is never enough. They endlessly question everything they read rather than rolling up their sleeves and finding out for themselves.

This may sound odd, but I often equate taking action with the observations I made as a parent while watching my kids learn to walk. Babies don’t study everything there is to know about walking before trying. Initially, they have no idea what they are doing. They fall down over and over again, but eventually they figure things out.

In many ways, the same idea applies to exercise. When I began training 20+ years ago, I didn’t know a fraction of what I know today. I’m glad I didn’t wait until now to start however. Much of what I know is the result of me trying countless things and learning along the way.

In summary, while this man’s transformation is certainly incredible, it’s how he started that really sticks out to me. It may sound ironic, but often times the most intelligent decision you can make is to think less and do more. Get your hands dirty and figure it out as you go.

“Be content with what you have, rejoice in the way things are. When you realize there is nothing lacking, the whole world belongs to you.” – Lao Tzu