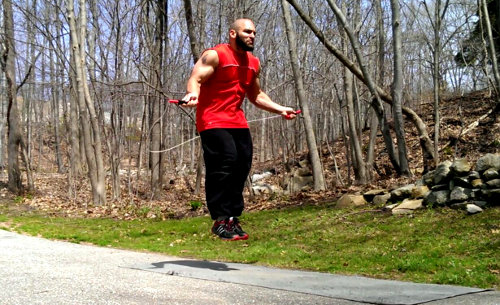 If you’re familiar with me, you know that I’m a huge fan of jumping rope. The jump rope has long been one of my favorite conditioning tools. The benefits of jumping rope are undeniable. It’s one of the few exercises that will not only enhance fitness, but also develop attributes such as agility, coordination, footwork, and quickness. The jump rope is also inexpensive and convenient. You can skip rope almost anywhere. Yet, while the rope can be used in tight quarters, there are also benefits to skipping in an open area that allows you to move in various directions.

Earlier this week, I posted a short video to Instagram demonstrating how you can include movement within your jump rope workout routine. Unfortunately, Instagram only allows 15 second clips so I’ll use this entry to expand upon the topic.

First, you can view the brief demonstration below. Notice how I continue to move while I skip. I’m never stationary for more than a second or two. This style of rope work is clearly much different from many of today’s popular double unders for time workouts. Rather than perform a single turning style repeatedly, I’m constantly moving and varying the rope’s action.

As for the benefits of moving front, back, and side to side, there are several. From a conditioning standpoint, it won’t take long for you to notice the difference. The lower body challenge is certainly unique. When you actively move while skipping, you aren’t just stepping over the rope. You are also pushing off the ground to promote locomotion. And whenever you run out of room, you must push back to reverse directions. This holds true whether you are moving front to back or side to side.

Furthermore, movement also adds a unique element to the coordination and agility challenge. You can’t just haphazardly move while skipping. Instead, you must be conscious of the rope with each step that you take. The faster you move, the more conscious and responsive you must be.

An Addition, Not A Replacement

Considering the benefits of moving while you skip, some might assume that you should always be moving when jumping rope. That’s not entirely true however. There are certainly jump rope workout routines that can be performed without movement. Short, high speed intervals are a prime example.

For instance, if you are performing a 30 or 60 second interval, movement could actually detract from your overall turning speed. During an all-out interval, you should eliminate distractions and focus on maximal rope speed. Sprint in place as fast as you can.

An example of a criss-cross interval can be seen below:

The fact that movement can be a useful addition doesn’t negate the benefits of the fast paced interval. Therefore, it’s not a case of better or worse, but rather apples to oranges. Both variations are useful for different reasons. During the interval workout, I’m still challenging myself to work as hard as I can. My focus is on rope speed instead of movement.

Furthermore, as evident above, you won’t always have room to move. That doesn’t mean you should abandon your jump rope training. Make the most of wherever you are. You can skip rope almost anywhere.

When To Add Movement

A better way to include movement when skipping is during longer intervals or extended rope routines. Two examples include the following:

These two examples are quite common with athletes such as boxers. For instance, after finishing a sparring session, a boxer will often skip rope. If the boxer is skipping for 3 minute rounds, that’s an ideal time to include movement and vary the intensity. The jump rope workout can be performed in a way that mimics the demands of an actual round. You’ll move front, back, and side to side, with occasional fast speed bursts.

The same can be said of a longer, continuous session. If you skip rope for 20 minutes, you should naturally move and vary the intensity throughout the session. Doing so will not only prevent boredom, but also provide numerous fitness benefits. The varied intensity will in many ways mimic a Fartlek running session. You’ll speed up and slow down as needed.

Adding movement to a jump rope workout is everything but new. A few classic examples can be found in the video below. At around the 1:20 mark, you’ll see the legendary Jack Dempsey moving in various directions while skipping rope inside of the ring. And shortly after the 2:00 mark, you’ll see another legendary heavyweight include movement within his routine. Rocky Marciano can be seen moving in multiple directions with various steps.

In summary, there’s no denying that I am a huge fan of the jump rope. You’ll be hard pressed to find another tool that is so inexpensive, effective, and versatile. Jumping rope is truly an exercise that you will never outgrow. You can always work harder, longer, or with new variations. Adding movement to an existing jump rope workout routine is a prime example. Moving while skipping will not only spice up your session, but also provide benefits that can’t be replicated with any other tool.

“There’s not a muscle group that you use in the ring that jumping rope doesn’t work; that’s why it’s such an important part of the fighter’s workout.” – Joe Frazier