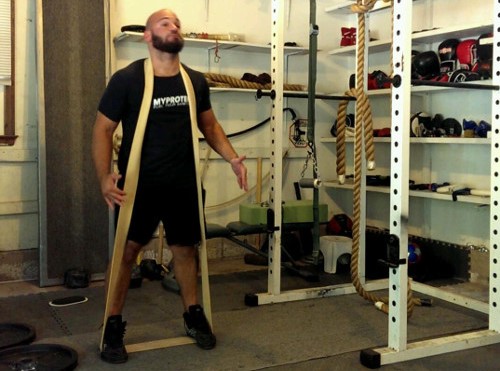 Earlier this week, I posted a short video to Instagram of me demonstrating resistance band good mornings. Since sharing the video, I’ve received several questions about both the exercise and the resistance bands. With that in mind, I believe a short entry will be helpful to clarify some of the confusion. Band good mornings have long been a staple within my routine. The exercise has always served me well, yet it’s one of those movements that rarely receives any attention.

A demonstration of the exercise can be seen in the previously referenced video below. Notice how I stand inside the band while the opposing end is looped around the base of my neck. I’m focused on exploding through the band with each repetition.

If you haven’t performed band good mornings before, you can expect considerable soreness after your first few sessions. The band good morning certainly classifies as a movement that is deceivingly difficult. Hamstring soreness is particularly common when first performing the exercise.

As for the inquiries I’ve received since sharing the video, I will address the most commonly asked questions below.

What type of band are you using?

I perform band good mornings with an Iron Woody Fitness monster band. I’ve had a pair of these 4 inch wide bands for over 10 years now. They provide a considerable amount of resistance and are quite durable.

When I first shared the video, I wasn’t sure if Iron Woody still produced their monster bands. Upon further review, it appears that Iron Woody is still producing the same bands. They’ve just upgraded the color and logo as seen below. 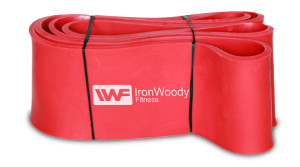 Can I perform the exercise with smaller bands?

You certainly can perform the exercise without monster bands. In fact, I wouldn’t even consider a monster band if the exercise is new to you. What you will need however is a 41 inch band. Shorter bands will not provide adequate range of motion.

How do you progress with the exercise?

If you begin with a lighter resistance band, you can obviously increase the challenge by working against stronger bands. You can also double up smaller bands if you don’t have access to monster bands. For instance, I’ve had some athletes pair up a large and medium band with this exercise (see here).

It should be noted however that this isn’t the type of exercise where you’ll be seeking to hit a one rep max. The rep range for band good mornings will almost always be moderate. You don’t need to load up so much band resistance that you are only hitting a few reps.

What is your preferred rep range?

I typically perform three to five sets of 15 to 20 reps.

How often do you perform the exercise?

Typically speaking, I perform this exercise between one and three times per week. The ideal frequency will obviously depend on several related factors (i.e. additional work load, work capacity, intensity, volume, etc.).

Personally, I average twice per week with this movement. I usually perform band good mornings towards the end of a session. For instance, I may hit band good mornings after deadlifting or after training my core with exercises such as standing rollouts. The lower back strength and endurance developed from the bands proves useful for both of these movements.

Does the exercise cause pain to the back of the neck?

There’s definitely tension on the neck throughout the exercise. I don’t consider it painful though as I spend a lot of time training my neck. I would however advise taking off any chains that you might wear before performing the exercise. Band good mornings don’t mix well with jewelry.

In addition, some athletes prefer to wrap a towel around their neck when performing band good mornings. Others may opt to wear a hooded sweatshirt with the hood up. The towel or hood will prevent the band from rubbing against the skin. Personally, I’ve performed the exercise so long that the bands don’t bother my neck. A towel or hood isn’t a bad idea though.

Aside from demoing band good mornings in my core training DVD, I’m as guilty as anyone for not giving the exercise enough attention on this site. I’ve performed the exercise for so long that perhaps I’ve taken for granted how useful it has been to me over the years. The low back endurance alone that I’ve derived from band good mornings is truly invaluable. Whether I’m performing manual labor or high rep sets in the weight room, my low back never seems to run out of steam. I attribute much of that durability to my consistent performance of band good mornings over the years.

If you haven’t tried the exercise before, I highly recommend it.

“Success is neither magical nor mysterious. Success is the natural consequence of consistently applying the basic fundamentals.” – Jim Rohn