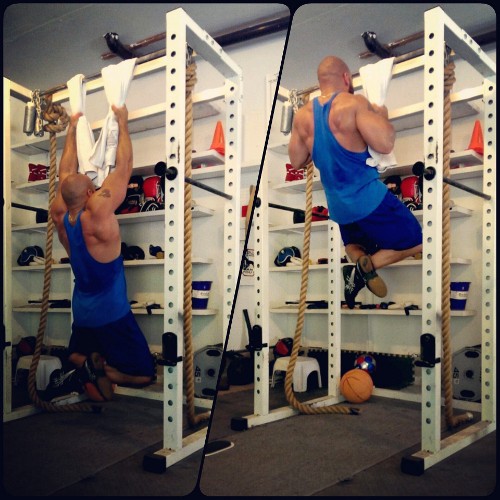 A few months ago, I mentioned how a pair of gloves could greatly increase the challenge of certain grip training exercises. Since that time, I’ve heard from several readers who’ve been surprised by the difficulty of that simple modification. It’s one of those exercises that you can’t fully appreciate until you’ve tried it. Another grip exercise from my Untapped Strength book that fall into the deceivingly difficult category are towel pull-ups with two full sized towels.

Towel pull-ups are a fairly common grip training exercise. Unfortunately, most people who perform towel pull-ups limit themselves to one towel. For that variation, you’d hang a single towel over a bar and grab one end with each hand (see below). 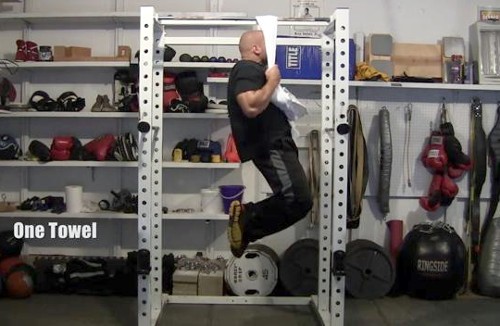 The single towel pull-up provides a useful introduction to grip strength, but is only the beginning. Adding a second towel will greatly increase the difficulty. Each hand will be forced to grip both ends of a single towel. As a result, each hand must squeeze much more material. You’ll notice that my thumbs cannot even reach my fingers in the topmost picture. Each towel is too thick for my fingers and thumb to wrap around.

When discussing towel pull-ups, size matters. If you want to maximize your towel pull-ups, use full size towels (ex. beach towels). Smaller towels such as those commonly found in a kitchen will not be nearly as difficult. The smaller size means less material that you are forced to grip and crush. The difference between small and large towels is literally night and day. You will instantly notice the difference on your first repetition.

Therefore, rather than choosing between towels and ropes I enjoy working with both. You’ll actually notice two ropes hanging from the pull-up bar at the top. I also climb rope regularly and have shorter strips of various thicknesses that provide an endless assortment of challenges.

In summary, adding a second towel to your towel pull-ups is one of those variations that many athletes mistakenly overlook. It is such as simple modification that it’s common to underestimate the difficulty. As is the case with many grip exercises, it looks easy until you try. And furthermore, it’s also the type of modification that can be enhanced further. For example, you could combine the previously mentioned gloves with two towels for an incredibly difficult exercise. Such a combination will be less expensive than most commercial grip training products but equally, if not more, difficult.

“Trust not too much to appearances.” – Virgil