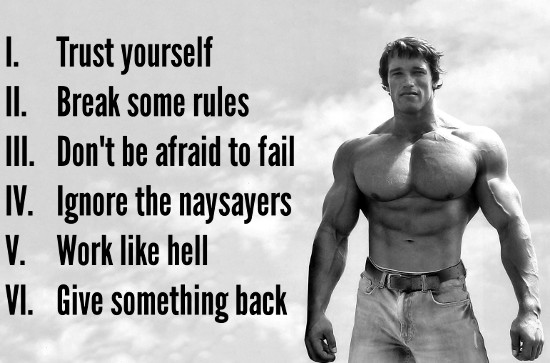 Following last week’s post about sleep requirements, a few people have mentioned Arnold Schwarzenegger’s sleep related advice. When Arnold shared that now famous wisdom, he wasn’t just talking about sleep however. His comments on the subject were part of a longer speech about success. I’ve actually shared the speech before, but it is the type that never grows old. If you have a few minutes to spare, take a look at the video below and let his wisdom soak in.

Arnold’s comments about sleep come at approximately the 3:30 mark. As you’ll hear, the context of his advice isn’t just about sleep though. What he’s really emphasizing is the importance of ridiculously hard work.

Unfortunately, many people still seem to misinterpret the true meaning of hard work. For instance, following my entry about sleep, a few people expressed to me how difficult it was for them to function with less than 8 or 9 hours of sleep. One person even went so far as to blast me for suggesting otherwise.

I understand that feedback and criticism come with the territory, but I’m not here to argue with anyone about how much sleep they should get. As I mentioned before, I’m only sharing what has worked for me as a busy athlete, parent, and business owner. I’m not suggesting that you follow my lead, nor am I suggesting that it is going to be easy.

I’ll be the first to admit that working my ass off around the clock is hard. It would be much easier to sit around and sleep the day away. I’m not interested in choosing the easy path though. When I first began sleeping less, it was rough and it didn’t change overnight. I knew what had to be done however so I accepted the sacrifices that had to be made. I wasn’t going to give up on my dreams because I was tired in the morning. To put it bluntly, I had to suck it up and deal with it. I didn’t care if I was tired. I was always told that you don’t stop when you are tired, you stop when you are done. That’s become my philosophy for life.

Absorb What Is Useful

As I’ve said in previous entries, I’m not here to tell you how to live your life. I’m also not suggesting that you copy Arnold Schwarzenegger. As Bruce Lee would say, absorb what is useful, discard what is not. Just don’t be so quick to give up on an idea because it is difficult.

When you embark on something that is new or different from the norm, it’s not unusual to face challenges that are foreign to you. It’s the obstacles that you overcome in life that often make you who are you. If you run from every obstacle you encounter, you’ll never build anything substantial. You’ll just blend in with the crowd and be like everyone else.

It may sound like common sense, but so many people seem to forget that separating yourself from the norm means doing things that normal people aren’t willing to do. I always remind myself that if it was easy, everyone would do it. And the last thing that I want to be is just like everyone else.

Therefore, the decision to sleep less and work harder is a no-brainer for me. It used to be difficult but it eventually became a way of life. I first made the habit, and now the habit has made me. I embrace the grind and wouldn’t have it any other way.

“The worst thing I can be is the same as everybody else. I hate that.” – Arnold Schwarzenegger