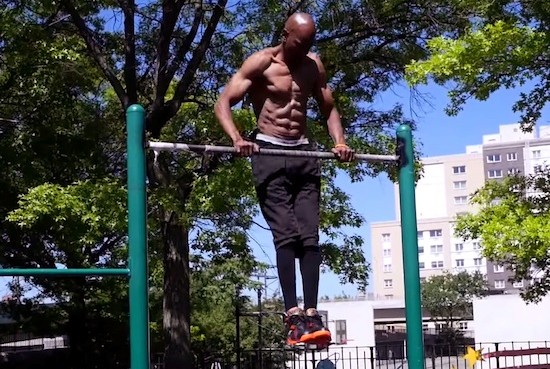 I’ve been known to lift stones and logs, perform pull-ups from trees, and run hills in the woods. Therefore, it shouldn’t come as a surprise that I’ve also featured several like-minded individuals. Yesterday’s entry is a prime example. The footage from that story is some of the best I’ve seen. Unfortunately, not everyone has access to such beautiful and secluded landscapes. That’s no reason to avoid training outside however. Contrary to what some may initially assume, wooded areas are not the only options for outdoor training. In fact, some of the best calisthenic displays that you’ll ever see can be found in urban playgrounds. The video below of Anthony “iNatural” Alderman is a great example. He’s been training on the bars for over 45 years now.

At age 53, Anthony Alderman is physically more capable than the vast majority of adults half his age. He performs exercises such as muscle-ups with ease. His physique is also a testament to his hard work and consistency. All of those years of training have created a body that is strong, lean, and capable.

It’s obviously great to see a 53 year old man perform at such a high level. What I like most about the story isn’t Anthony’s ability however, but rather the simple approach that he subscribes to with training. There is no secret to his success. Anthony Alderman has trained for longer than many reading this entry have been alive. He is yet another product of hard work and consistency.

As far as the exercises he performs, there are some neat variations, but everything is relatively straightforward. There’s nothing overly complicated or flashy. He’s clearly rooted in the fundamentals. The bodyweight squats, pushups, and pull-ups that he performs are available to anyone. The difference therefore between Anthony and others isn’t the exercises that he performs, but rather his willingness to continually perform those exercises on a regular basis. He doesn’t jump from program to program. He’s figured out what he enjoys and what works for him and never strays far from the basics.

I’ve often said that the average person does not need anything but a regular dose of a few basic exercises. For example, imagine if it was common for every adult to regularly perform a few sets of pushups, pull-ups, dips, squats, and lunges. That alone would lead to huge improvements in quality of life for many adults. Anyone who suggests otherwise is either ignorant or likely sells gym memberships for a living.

In summary, Anthony Alderman clearly demonstrates the potential of a simple calisthenic program. He also shows that the body can continue to function at a high level as the years pass. Imagine if everyone followed suit and began to perform similar exercises on a regular basis. Perhaps this story wouldn’t even be a story. It would just be what we all expect from adults at any age.

“Do what you can, with what you have, where you are.” – Theodore Roosevelt