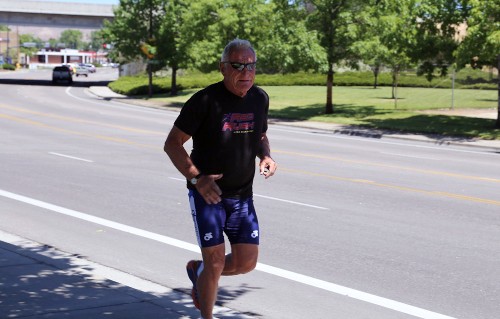 Lew Hollander has competed in over 2,000 races. He’s finished every race that he has ever started. He is most known for his triathlon accomplishments however. He completed his first of many in 1985, and now holds a world record as the oldest person to finish an Ironman. He did so at 84 years old. If you aren’t familiar with the event, it includes a 2.4 mile swim, a 112 mile bike ride, and a 26.2 mile run. In other words, it is the type of event that would humble most adults who are a fraction of Lew’s age. Meanwhile, Lew is busy preparing to break his record again. He plans to compete later this year as an 85 year old. As for Lew’s secret to success, he is a product of consistency and hard work.

The video below offers a brief introduction to his philosophy. To no surprise, there is nothing fancy about his approach. A summarized version is that he exercises at a brisk pace on a regular basis and limits his intake to real food.

Lew Hollander’s story is the type that deserves national attention. Unfortunately, his name is hardly known outside of the ultra-endurance community. Apparently, hard work over many years coupled with common sense nutrition does not make for a flashy front-page story. There’s no controversy, transformation, or miracles involved. All that you have is a hard working man who is willing to share how he’s aged gracefully and lived an active life.

What Do You Take?

One of my favorite stories about Lew Hollander comes from an interview that I read a while back. He retold a story of a man who approached him after hearing about his triathlon success. Lew was eighty years old at the time. Clearly amazed by his success, the man immediately asked Lew what he took. There had to be a magic pill, right?

Lew’s response to him was classic.

“Nothing. You want to spend a day with me and see what I do? This was a conscious decision.”

The man didn’t want any part of it.

Another classic quote from Lew Hollander can be seen below.

“Life, your length of life, is like a bank account. You can put money in, or you can take it out. You can be in debt and die early and you’ll be miserable. Eat right and exercise and have a full life. That’s money in the bank.”

The idea of investing in your health is something that more people need to hear. A hearty bank account will not preserve your quality of life if you lack the health to accompany it. There’s a distinct difference between being alive and living your life to the fullest.

Fortunately, you don’t need anything fancy to do the latter. Lew Hollander offers a prime example. He is not sitting idle waiting to die. At 85 years old, he’s still pushing himself each day in hopes of breaking another world record. He knows that no one can do it for him. Instead, he wakes up each day, ready and willing to tackle the difficult goals that he has set for himself. There aren’t any secrets or excuses. It’s just a man on a mission who refuses to settle for anything but his best.

If that type of commitment over so many years doesn’t inspire you, I don’t know what will.