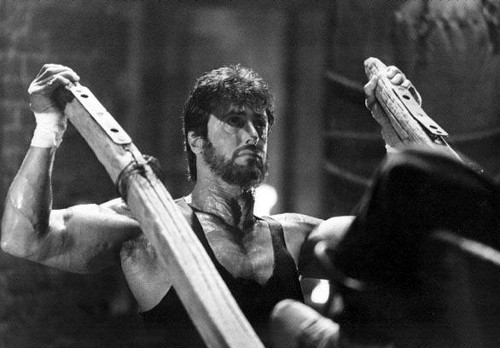 Earlier today I shared a classic training montage on my Facebook page. In case you missed it, the video was from the 1985 film Rocky IV.

I still recall watching the film in the theater when it first came out. Thirty years later, the training footage remains as inspirational today as it was when I first saw it. And while some may argue that Rocky was a fictional character, I’m not ashamed to admit that the early films inspired many of my own outdoor workouts (ex. see here).

I’m not the only person to be inspired by an old Rocky film or soundtrack. In fact, today is not the first time I’ve shared a Rocky montage. Whenever I do, it goes without fail that hundreds of people either like or share the video. There’s just something about the old Rocky films that get the blood flowing.

Ironically, 1985 didn’t just offer fistic inspiration via Rocky Balboa. That same year provided fight fans with one of the most legendary bouts in the history of combat sports. On April 15th, 1985, Marvin Hagler and Thomas Hearns went to war in what will always be remembered as a classic. And similar to Rocky IV, the Hagler-Hearns bout remains just as inspiring today as it was when it first happened.

It doesn’t matter that I’ve studied the bout so many times that I have memorized the commentary and sequence of punches. It is always exciting to watch two tremendously skilled and conditioned warriors battle it out.

We don’t need Captain Obvious to remind us that Rocky IV and Hagler-Hearns remain inspiring. Fortunately, there is another point to this entry. To put it bluntly, what worked thirty years ago still works today. Fighters such as Thomas Hearns and Marvin Hagler could compete in any era. In other words, what they were doing thirty years ago would still work today. And if these men could get into top condition without modern technology, so can you.

Regardless of the so-called advancements that are touted by today’s industry, there are certain qualities that cannot be manufactured by anyone but yourself. At some point, your success (or lack of) is not going to be based on the equipment you have or the facilities you use. What matters more is how hard you are willing to work with whatever you have.

Rocky IV may have been a movie but that doesn’t negate the effectiveness of the training style filmed throughout. Anyone who suggests otherwise has never worked in such an environment. Personally, I probably spent more time training outdoors last year than I have any other year. Yet despite planning less and working in as crude of an environment as ever, I can honestly say that I performed some of the best and most challenging workouts of my life.

In summary, more people need to be made aware of the exercise potential that exists in the world around us. So many individuals live under the false assumption that they do not have what they need to advance and improve. Hopefully, looking back to a classic bout such as Hagler-Hearns or a film such as Rocky IV can awaken these people to the idea that modern technology is everything but a necessity.

Thirty years is literally a blink of an eye when considering human evolution. Don’t be fooled to believe that effective methods from the past have somehow expired. More often than not, the old school methods remain as relevant and effective as ever.

“The years teach much which the days never knew.” – Ralph Waldo Emerson