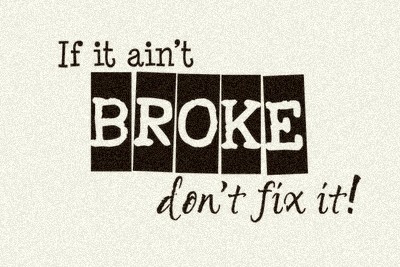 It was almost six years ago when I wrote about hill sprints and simplicity at the link below.

Another Vote For Simplicity

In the years since, that old entry has been viewed thousands of times by readers around the world. To this day, I still receive an occasional comment or question about it. Most of the feedback is related to hill sprints or running. Ironically, perhaps the most important paragraph within the entry is rarely discussed.

Within the last paragraph, I wrote about a friend of mine who at the time was in his late 40s. He is a former fighter who stayed in excellent shape with what many would consider a basic routine. When I was last in contact with him, his routine consisted of a strength workout on day one, hill running and calisthenics on day two, and a boxing workout on day three. He would repeat this three day sequence twice a week.

Regrettably, I lost contact with my friend a few years ago. He’s an old school guy who doesn’t have email and never got involved with social media. I had no way to find him. Fortunately, to my surprise, I ran into him at a boxing event over the weekend. He’s in his 50s now and is still in great shape. After busting his stones about disappearing from the earth, we grabbed a cup of coffee and chatted for a few minutes before the fights. I asked him how his training was going and he nonchalantly replied,

He went on to say that he no longer has access to free weights. Instead, he has been working with a weighted vest. He wears it for exercises such as pull-ups, pushups, dips, squats, and lunges. A strength workout for him consists of a few sets wearing the vest and then a few sets without it. He averages two weighted vest workouts each week in his basement. He has also maintained his running but has shifted towards more trail work. He likes running the trails and will usually do a few sets of calisthenics before or after the run. He also does the same boxing workout once or twice a week which consists of shadow boxing, punching the heavy bag, and skipping rope.

The Moral To The Story

Believe it or not, there is a point to this entry. I’m not just writing to let everyone know that I bumped into an old friend over the weekend. Instead, the message that I hope to convey is one that I’ve shared many times before. In short, complex routines are not necessary for general health and strength. My friend is in his 50s and could hang with most healthy adults who are half his age. Ironically, he has maintained his ability with a routine that many fitness professionals would surely critique.

My friend doesn’t care about periodization, restoration, variety or any other industry buzzword. In fact, he doesn’t even have a computer. He told me that his hard drive crashed sometime around 2012 and he had no reason to purchase another. Therefore, he’s obviously a guy who doesn’t wait until Monday morning to read the latest breakthroughs in the fitness industry. He doesn’t subscribe to any newsletters and has probably never read a scientific journal in his life.

His exercise philosophy is pretty simple. In his words,

“Push yourself and try to find something that you enjoy, or at least don’t dread doing. And if it ain’t broke, don’t fix it.”

And while his routine and philosophy may seem archaic, the results are impossible to deny. This man’s consistency and diligence have proven to be invaluable. He is in tremendous shape in his 50s and doesn’t pay any attention to the modern fitness industry. His comments about the industry were actually quite classic, but are probably something I shouldn’t share here to avoid any lawsuits.

In summary, it was certainly great to catch up with an old friend. It is always refreshing to see an example of hard work, consistency, and simplicity. Such attributes will never receive too much attention from this revenue-driven business, but we should never forget their relevance. Our ability to get in shape is not nearly as complicated as many would like us to believe. Fancy equipment and routines are far from necessities. Plenty can be accomplished with even a rudimentary program as long as you are committed to pushing yourself.

“Beware the barrenness of a busy life.” – Socrates