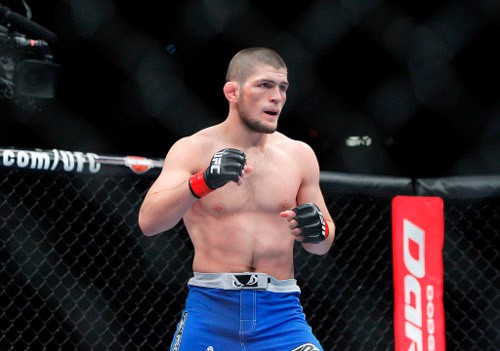 If you are familiar with this blog, you have likely seen numerous examples of world class fighters who have thrived with a low-tech approach to training. I have intentionally highlighted fighters from all styles to demonstrate the effectiveness of such simplistic methods. An abbreviated list of athletes who have been featured before include Fedor Emelianenko, Buakaw Banchamek, Marcelo Garcia, Jack Dempsey, Ray Robinson, and countless others.

Khabib Nurmagomedov is yet another name that can be added to the list. He is a Russian mixed martial artist who is 22-0 as a professional. He is a multiple time Combat Sambo World Champion, a judo black belt, a NAGA grappling champion, and currently a lightweight fighter in the UFC. If you have not heard of Khabib before, the video below will provide a brief introduction.

As for Khabib’s training, he relies heavily on the sport and applies himself diligently with the basics. The ten minute video below captures some of the work that he performs throughout a training camp. Within the clip, you will not find anything fancy. Instead, you will see a world class fighter who trains in an environment that is as rudimentary as any.

You will see him running, shadow boxing, lifting stones, performing calisthenics, punching the mitts, and performing various partner drills. His training style is one that could be utilized almost anywhere. There is no dependence on high-tech equipment or the sophisticated programs that are so heavily marketed in today’s industry. Khabib’s training is not for show and is not performed with the intent to sell you on a particular methodology. His training is done for a single reason, which is to prepare him to fight at a world class level.

So much can be learned from Khabib’s example, as well as the others who have been featured before. First and foremost, if you are a fighter, the most important part of your training involves fighting. Whether sparring, drilling with partners, hitting the bags, or hitting the mitts, such work is physically taxing and vital to your development. The significance of supplemental work pales in comparison to that of your actual sport training.

As for all around conditioning, simplistic methods have stood the test of time for good reason. As Khabib and countless others have demonstrated, hard work with the basics is as effective as anything. You do not need a complex or elaborate program to condition yourself to fight. Intensity can be applied with almost anything, including nothing. Exercises such as swinging a sledge, running hills, and calisthenics have always been effective and always will. Such work can be performed almost anywhere and can be easily implemented alongside sport training without interference.

In summary, you do not need to be a fighter to benefit from Khabib Nurmagomedo’s example. If he can prepare to fight the best in the world with such simplistic methods, the average person can certainly get in shape with such methods as well. Don’t be fooled to believe that you need a complex program to condition yourself to thrive in the world around you. Apply yourself diligently with almost anything and the results will soon follow.